With a festive launch of the new Bajaj Pulsar 150 being planned, the motorcycle has now been spied at a dealership by Youtuber and automotive enthusiasts Aayush ssm. To make things clear, this is not the ABS variant, which was spied earlier. This is a new cosmetic upgrade variant which will launch in the coming days.

As can be seen, this new Pulsar 150 Special Edition misses out on the decals and stickers which we have seen usually on the Pulsar 150 bikes. Instead, this bike is seen in all black colour scheme, with subtle hints of red seen on the fuel tank, above the headlight and on the alloys. 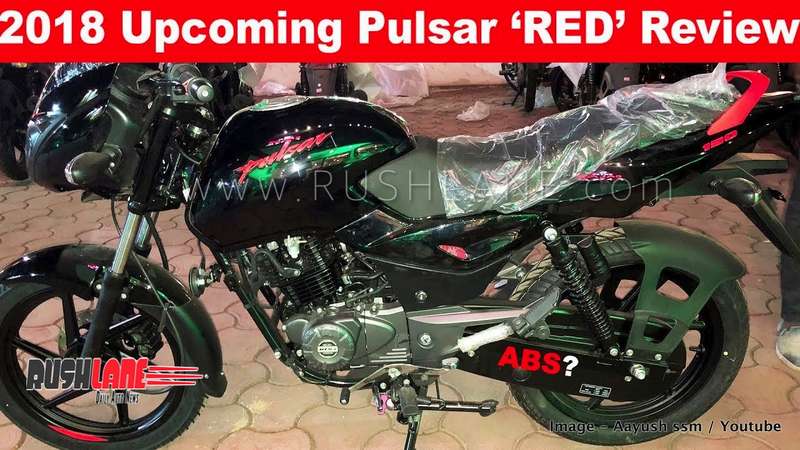 Engine specifications on the 2018 Bajaj Pulsar 150 Special Edition would be same as seen on regular P150. This will be in the form of single cylinder 149cc, air cooled engine offering 14 PS power at 8,000 rpm and 13.4 Nm torque at 6,000 rpm mated to a 5 speed gearbox. Expect the motorcycle to be priced at aa similar price tag of the existing P150.

Speaking about the Pulsar 150 ABS, which was spied earlier, it is expected to be launched earlier next year. It has been noted with a dual channel ABS unit with rear disc brake allowing it to comply with new Indian safety standards which make it mandatory for all two wheelers with displacement of 125cc and above to sport ABS as standard and smaller displacement models to get combi braking system.

The engine too has been retuned not only for enhanced performance but also for lower emissions. Bajaj Pulsar 150 ABS also gets cosmetic updates. It will receive a larger silencer end canister larger than that seen on its current counterpart, dual tone color scheme, clip on handle bars, tubeless tyres and LED tail lamps. It will be positioned on a telescopic front fork and get 5 step adjustable gas charged shock absorbers at the rear while there is no change in the 15 liter fuel tank. The Pulsar 150 ABS will also ride on the same 80/100-17 front and 100/90-17 rear tyres.

Bajaj Pulsar 150 ABS will be priced from around Rs 90,000. It will compete with the Honda CB Unicorn 150, Hero Xtreme Sports and TVS Apache RTR 160 and also with the Suzuki Gixxer ABS and Honda CB Hornet 160R ABS.