Disclaimer – As the manufacturer (TVS Motor Company) has blacklisted Rushlane from it’s events/rides as a consequence of decisions based on restrictive practices, this post is written on a third party video of independent copyright sourced from social media.

Ready to herald in the festive season in India, a new variant for TVS Jupiter, called Jupiter Grande 5G edition has made its way to company dealerships. Bookings are open at a payment of Rs 5,000. Deliveries start this week. 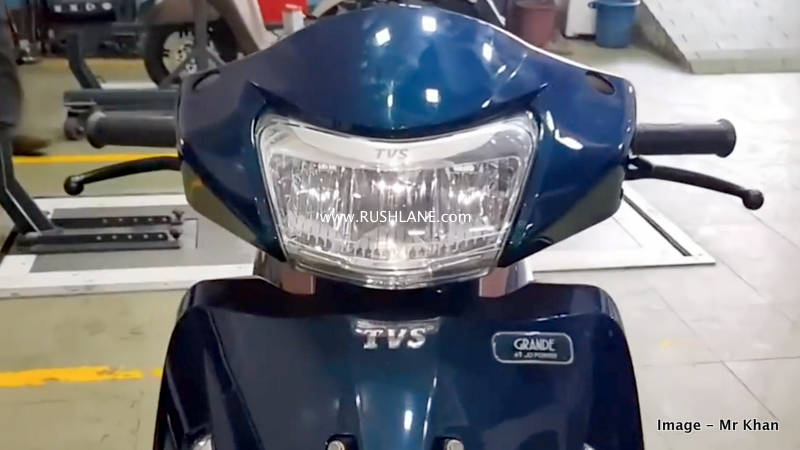 Based on the existing Jupiter, the new Grande 5G edition share similar body work but changes on the latter include a full LED headlamp unit with LED DRLs, a semi-digital instrument cluster with analog speedometer and a separate digital unit for fuel level, trip meter and clock. The instrument cluster now features an econometer.

2018 TVS Jupiter Grande sports a Starlight Blue body color with brown seating with quilting, offering better rider comforts. It gets a contrasting beige color on footboard, handlebars and front apron as is also seen on the Jupiter Classic. There are a host of chrome accents seen throughout its body adding to its premium appeal.

A mobile charger setup is also slated to be an added feature positioned in the under seat storage space. Braking is via drum brakes at both ends while TVS has also equipped the new Grande edition with front disc brakes. Two variants will be on offer – one with disc brake, the other with drum brake. The disc brake variant also gets industry first machine cut alloys. The company’s Sync Braking System will be offered as standard for added safety.

TVS Jupiter Grande is powered by a 109.7cc, single cylinder petrol engine offering 8 bhp power at 7,500 rpm and 8 Nm torque at 5,500 rpm mated to a CVT transmission. Though pricing is not yet been revealed, bookings open at a down payment of INR 5,000 while expected price is set at a premium over its current price of Rs 53,544. Hence the TVS Jupiter Grande disc brake variant could be priced between Rs 60,000-63,000. The new TVS Jupiter Grande 5G will compete with the Honda Activa 5G, Hero Duet and Yamaha Fascino.