The all new Bajaj Dominar 400 is slated to go on sale sometime in March this year. The bike has been spied multiple times, even featured in the official TVC of Bajaj brand. Some who got a chance to ride the bike in Ladakh, during TVC shoot, even managed to post first ride review videos of new Dominar.

Thanks to all this, we knew what are going to be the changes on board 2019 Dominar. For one, it gets USD in front. Second is the completely new exhaust system. And third, is the updated instrument console; which now delivers added information.

But what about engine specs? Was the engine going to deliver same power and torque as before? Or was it going to deliver more? Will it continue with SOHC setup, or will it get the more refined DOHC setup from KTM Duke 390? Well, there was no word on the same; until now. Thanks to folks at HyperRider.in, the brochure of 2019 Bajaj Dominar has leaked online. 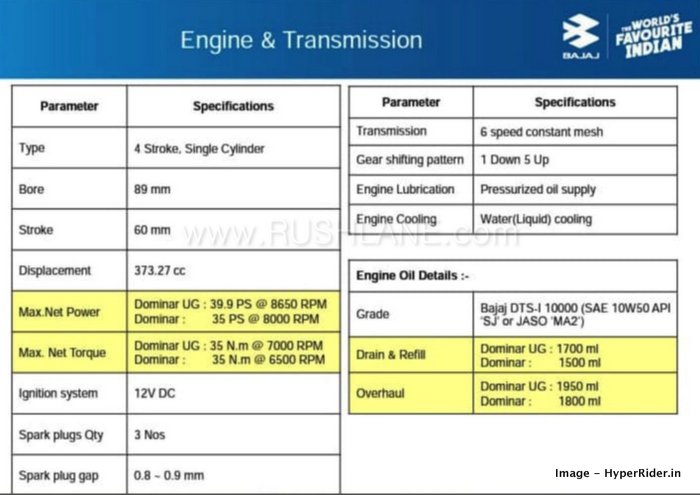 The new Bajaj Dominar has also been spied in various color schemes ranging from bright green to red and white. In terms of visual updates, the new Dominar gets a revised instrument console with added information on its display regarding time, odometer, gear position, speed, fuel level, etc. It also gets new exhaust system with twin cannister, USD front forks in the place of telescopic units seen on its earlier counterpart.

Other visual updates include a new rear view mirror, leg guards and new exhaust system. Though the alloy wheels remain the same from the earlier version, these are now finished in black with silver accent as compared to gold rims seen on the former model. ABS will be offered as a standard feature with braking via the same Bybre 320mm disc in the front and 220mm disc at the rear.

Feature and engine upgrades would see a hike in the price of the 2019 Bajaj Dominar by around Rs.25,000-30,000 over its current model which is priced at Rs.1.63 lakhs. Competition will come from the Mahindra Mojo, BMW G310R and Bajaj’s fav Royal Enfield Classic 350.