2019 Bajaj Dominar is poised for launch in the next couple of days. Ahead of that, the motorcycle has been spotted in metallic Green shade, which is similar to Kawasaki Green. The latest spy images emerge from Pune, where Bajaj Auto manufacturing plant is located.

Apart from a more powerful engine, the 2019 Dominar also receives cosmetic updates. These will include new rear view mirrors, dual tone black and silver alloy wheels and new leg guards. 2019 Bajaj Dominar remains the same in dimensions, except for width, which is increased to 836mm from an earlier 813mm while weight is increased to 184.5 kgs from 182 kgs. 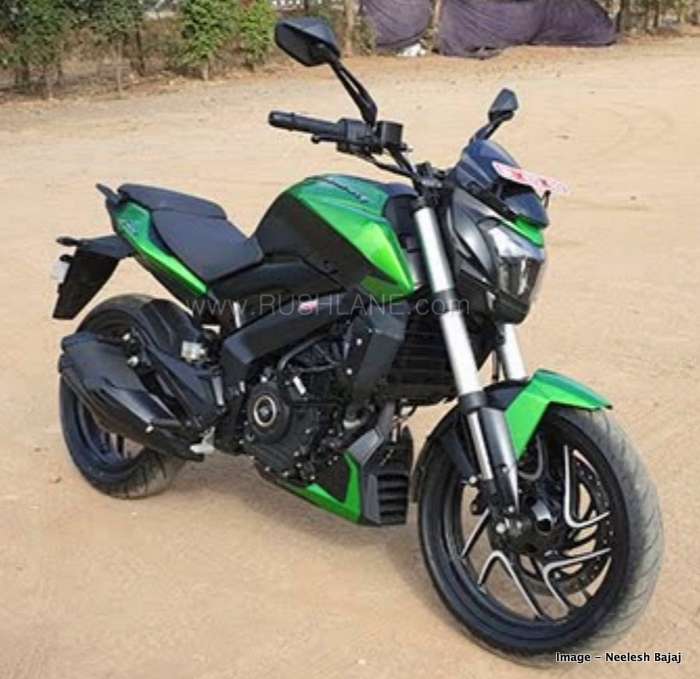 New Bajaj Dominar gets dual channel ABS, which is offered as standard – in compliance with new safety regulations being implemented from 1st April 2019. Braking will be via 320 mm disc brake in the front and 220mm disc brake at the rear while suspension will be via USD front forks, as against telescopic units seen on the earlier model while rear suspension stays the same at multi step adjustable mono shock unit. Bajaj Dominar is powered by the same 373.2cc single cylinder, liquid cooled engine. But tuned to now offer 39 bhp power at 8,650 rpm, an increase from the 35 bhp at 8,000 rpm offered on the earlier model. Torque figures stay the same at 35 Nm. The engine gets mated to a 6 speed gearbox. Updated engine offers quicker acceleration and a higher top speed. Thanks to a larger radiator, the cooling system is better.

2019 Bajaj Dominar will rival the likes of KTM 250 Duke, BMW G310R, Honda CB300R upon launch. Compared to older Dominar, the new one is expected to be about Rs 15-20k more expensive. With launch date looming near, sales staff and mechanics are undergoing training at Bajaj dealerships. Bookings for the new Dominar are being accepted at a token amount of Rs.1,000-2,000.