2019 Bajaj Dominar spied with saddle bags ahead of launch

With the new Bajaj Dominar 400 slated for launch sometime in early March 2019, multiple spy shots of the upcoming bike have revealed almost all the details. In addition to that, the leaked brochure from earlier this week, confirmed that power output has been increased.

Now, another spy shot of the new 2019 Dominar has emerged online, which shows the bike accessorized with saddle bags. The image was shared by automotive enthusiast Anandhu AR. 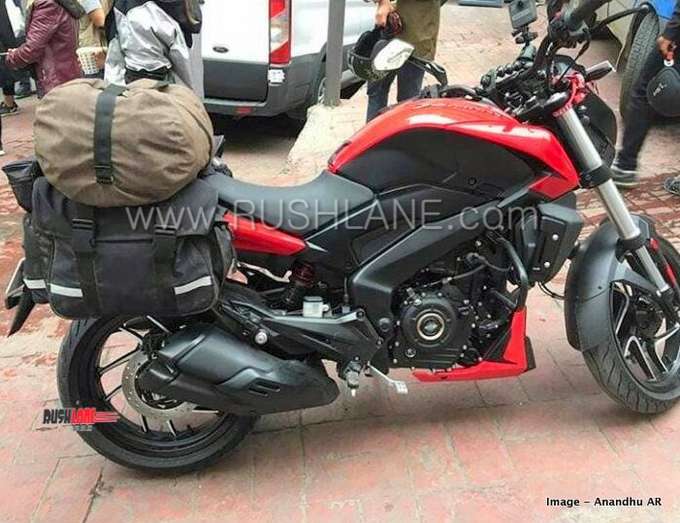 Speaking about the spy photo, it is of the same Dominar, which was used as the flagship product in the 2019 Bajaj brand film that was released last month. The ad was shot in multiple countries around the world, including India.

The new Dominar also gets a new exhaust system with twin canister. Then there are USD front forks in the front, as compared to telescopic forks seen on the outgoing model. ABS is now offered as standard. Braking system is same – 320 mm disc brake in the front and 220mm disc at the rear. Other notable changes on the 2019 Bajaj Dominar include black and silver finished 17” alloy wheels and same spec MRF tyres.

Speaking about dimensions of 2019 Dominar, while length and height remain unchanged along with wheelbase and ground clearance, there is an increase in width which is upped from 813mm to 836mm.

All these changes and updates will see price of the Bajaj Dominar hiked by around Rs.15,000-20,000 as compared to its current price of Rs.1.63 lakhs. The 2019 Bajaj Dominar will enter a segment of motorcycles comprising the likes of Mahindra Mojo, BMW G310R, Honda CB300R and Royal Enfield Classic 350.