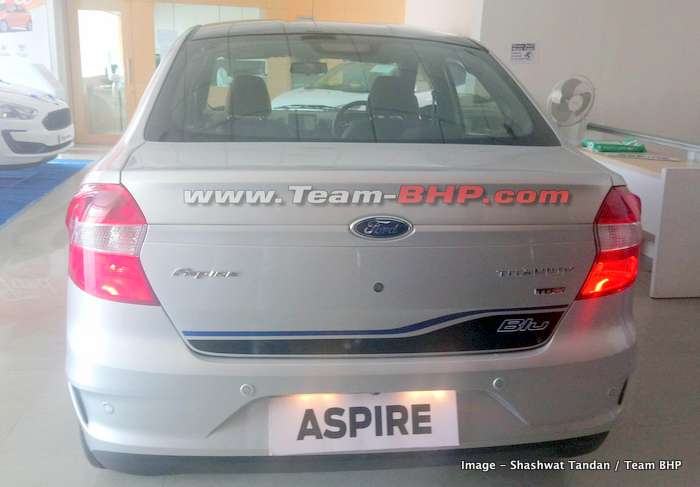 Ford Aspire Blu, a special edition model aimed at generating interest around the slow-selling compact sedan, has started reaching showrooms. Like the Figo Blu hatchback, the sub-4m sedan features minor visual tweaks and is based on the Titanium variant.

The formal launch and price announcement is expected in the coming days. The Aspire Blu edition can be differentiated from the regular Titanium variant by means of blu accents for the foglamp inserts, black-blue decals on the base of the doors and boot lid, glossy black alloy wheels and black roof. 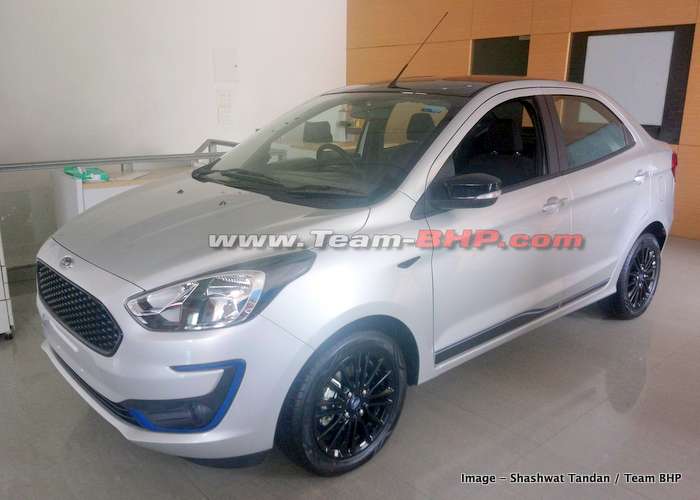 The Ford Aspire Blu is available in both petrol and diesel versions. The 1.2-liter petrol unit produces 95 hp and 120 Nm of torque while the diesel engine has 99 hp and 215 Nm of torque in store. A 5-speed manual transmission is standard across the range. The Ford Aspire Titanium is priced at INR 7.26 lakhs (petrol) and INR 8.06 lakhs (diesel). The Blu edition is expected to come with a nominal price hike.

Ford India has been struggling to keep its cash counter ringing of late. Even the company’s top-selling EcoSport compact SUV is facing immense pressure from newer rivals like Maruti Brezza, Tata Nexon and Mahindra XUV300. The arrival of Hyundai Venue is going to make life even more difficult for the Ford crossover.

The Aspire is the second best selling product in the automaker’s Indian portfolio with average monthly sales of just over 1,500 units between October 2018 and March 2019 but it is nowhere close to maintaining the capacity utilization factor of the Sanand plant at a satisfactory level.

There are reports that Ford India may shut down independent operations in the domestic market and form a new JV with Mahindra. It is to be noted that both automakers currently have a partnership for platform, engine and technology sharing.