After launching new Endeavour, Ford India is getting ready to launch facelifted Figo. More than 500 units were dispatched to dealers across last month, which are now showing up at dealer yards across the country. Thanks to this, undisguised leaked images and videos have started surfacing on the internet ahead of official launch.

Ford Figo update was long pending and was expected to follow soon after Aspire was updated in October 2018. However, it got delayed due to some reason. Updated Figo will sit below Ford Freestyle in the company’s line-up. Old Ford Figo was discontinued from the line-up, soon after the launch of Freestyle. 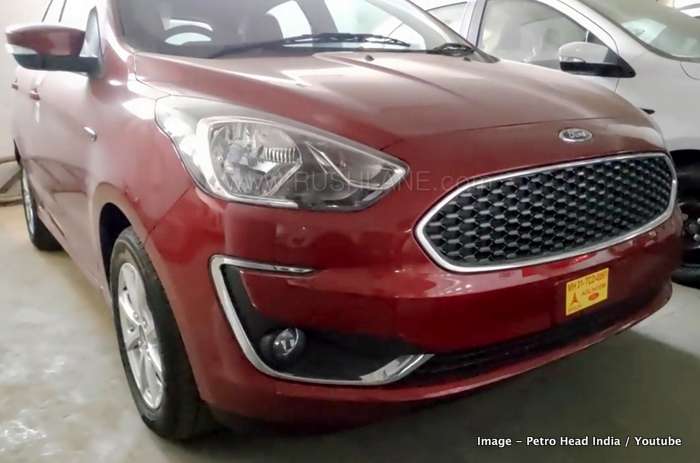 2019 Figo has redesigned exteriors, which match the style and elegance of Aspire. Front and rear bumpers have been reworked, new fog lamp unit has been added, headlamps and tail lights have been updated, honeycomb mesh grille now looks sportier and there are new alloys.

Interiors have also been updated, offering a new theme and several new features. The materials used on the inside now look a lot premium as compared to the outgoing model. The all black treatment gives a sporty look. Key features include a SYNC3 6.5-inch floating touchscreen infotainment system compatible with Android Auto and Apple CarPlay. Watch the detailed first look review video below.

2019 Ford Figo facelift will have advanced standard safety features such as dual front airbags, ABS with EBD, speed sensing door lock, seatbelt reminder and high-speed warning system. It is expected to be priced in the range of Rs 5 lakh to Rs 8 lakh (ex-showroom).

Ford India sales are on a decline. In spite of operating in India since Oct 1995, their market share in the country today stands at about 2.78%. Their average monthly sales ranges in the region of 7,000 to 8,000 units. With the launch of new Figo, the company would be hoping to improve sales. New Figo will rival the likes of Maruti Swift, Hyundai Grand i10, in the highly competitive small hatchback segment.