After launching the updated Figo in China, Ford is now getting ready to launch the same in India. Similar to the Figo in China, the 2019 Figo for India gets a more attractive exterior design and feature rich interiors. Though launch in India is on 15th March, Ford India has officially taken wraps off the car today.

Retaining its earlier silhouette, the new Figo sports some design element with the Aspire facelift. It is seen with a large honeycomb grille with chrome accents, new headlamp design and halogen units along with a new front bumper and round fog lamps. The new Figo will also get a wide airdam and new multi spoke black alloy wheels with similar black elements on its tailgate. 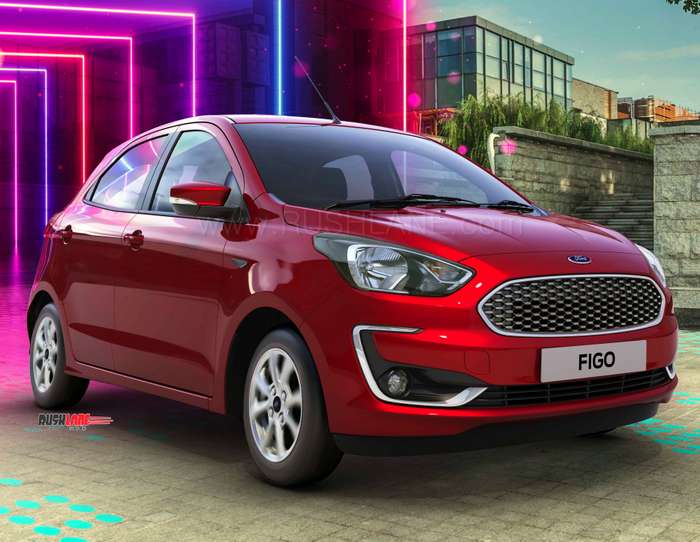 The interior layout will also borrow design elements from the Ford Aspire facelift. These include a new dashboard with a 6.5” floating display with Android Auto and Apple CarPlay along with Ford SYNC3 in car connectivity system. Auto climate control, rear defogger, push button start, dual USB ports and gear shift indicator will also be seen among its interior features. Safety features also get enhanced with 6 airbags, ABS, EBD, brake assist and seat belt reminder along with rear parking sensors being among its standard features along with traction control and hill start assist.

Major changes will be seen in its engine lineup. The Ford Figo facelift will gets a new 1.2 liter, 3 cylinder petrol engine from the Ford’s new Dragon series engines. This engine will produce 96 bhp power and 115Nm torque. It will continue to be powered by the 1.5 liter diesel engine as seen on the Ford Aspire, offering 99 bhp power and 215 Nm torque. The engine lineup will get mated to a 5 speed manual as standard and a 6 speed automatic gearbox. Test mules, sporting CNG stickers on the boot also indicate that Ford could be offering a CNG variant. Aspire CNG was launched last month. 2019 Ford Figo facelift will compete with the Hyundai Grand i10 and Maruti Swift in the same segment. It will sit below the Freestyle in the company line-up.

TO create buzz around the launch event of Figo, Ford has partnered with Tinder. Ford says, “Ahead of the March 15th India launch, Ford Figo’s unique association with Tinder also demonstrates the ethos of the brand and its audience, who believe in living life on their own terms.” Tinder users have to swipe right, on seeing Figo in their app. Lucky winners will get an all-expenses-paid date night and feature in a video with the new Ford Figo.

“The New Figo is made for those who don’t follow the crowd and are smart to make their own choices. Our association with Tinder not only communicates what Figo stands for but also reach the target audience in most effective, fun and engaging manner,” said Rahul Gautam, vice president, marketing Ford India.

“The Ford Figo is helping redefine how people view hatchbacks, while Tinder has changed the way that people meet and date around the world. Tinder has rapidly become a part of Gen Z popular culture and lifestyle. The partnership made sense to help unlock new experiences and spark new connections,” said Taru Kapoor, General Manager Tinder India.