The original Hero Karizma managed to carve a niche for itself in the Indian two wheeler market even when premium segment was pretty much non-existent. Despite having such a strong brand equity, Hero couldn’t leverage the Karizma nameplate for subsequent iterations. The two versions of Karizma ZMR effectively drove the brand into ground.

In an interesting development, Zigwheels reports that Hero Motocorp is working on a model that could finally become a worthy successor to the once famed flagship. The company is reportedly working on a fully-faired motorcycle based on the Xtreme 200R platform. The new product in question is said to carry the Karizma nameplate.

The new Hero Karizma would be the fourth product to be derived from Hero’s new 200 cc platform. The Xtreme 200R is already on sale while the Xpulse 200 and Xpulse 200T are slated for launch in first half of 2019. Speaking about the new Karizma 200 styling, it will be inspired from the HX250R concept, which Hero was developing with Erik Buell Racing. Though the 250cc engine never materialised, its styling seems to have been taken forward.

The 2019 Hero Karizma would be employing the Xtreme 200R’s diamond frame which is supported by a telescopic front fork (37 mm) and a rear monoshock. The 200 cc single-cylinder motor too will be borrowed from the Xtreme but we expect it to benefit from fuel-injection, and possibly, an oil-cooling system. In its new configuration, the engine is likely to dish out more power and torque than the current figures which stand at 18.4 PS and 17.1 Nm respectively. 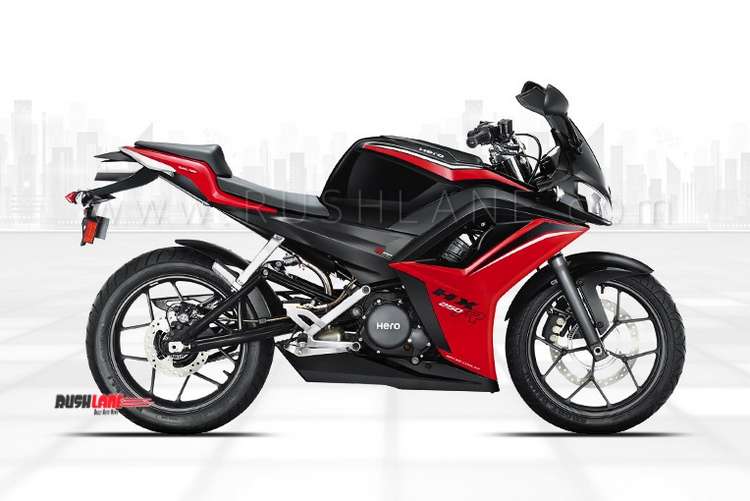 The new Karizma’s braking system too is most likely be carried over from its sibling which employs 276 mm front and 220 mm rear disc, supported by a single-channel ABS. The fully faired 200 cc motorcycle is expected to feature fresh styling with some retro cues, fully digital instrument console, LED lights, split seats, and so on.

The new Hero Karizma will be pitted against the likes of Bajaj Pulsar RS200 and Yamaha R15 V3.0. Given that new model will benefit from economies of scale, expect Hero Motocorp to arrive at an attractive price tag of around Rs 1.2 lakhs (ex-showroom).