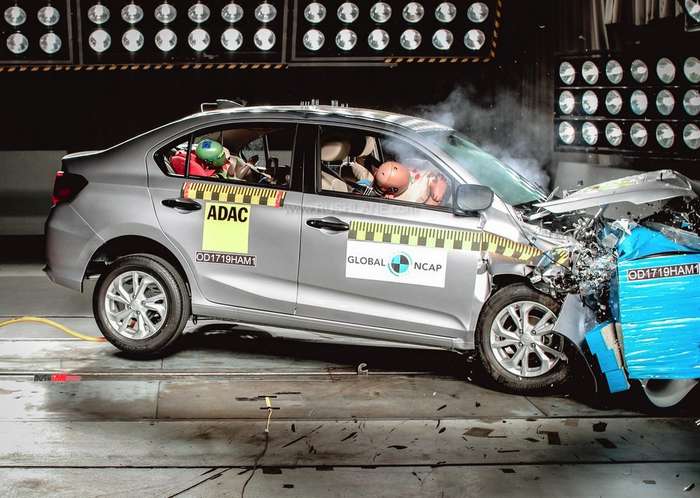 Honda Amaze for the African continent is made in India. For Africa, Honda Amaze has scored four stars for Adult Occupant Protection in the frontal crash test at 64km/h. The model tested is a 2019 RHD, 5 door sedan. Global NCAP did not reveal the kerb weight, but stated that the crash test weight is 1,173 kgs. Crash test weight includes the weight of crash test dummies (2 in the front, 1 child with child seat at back) and all the equipment and wiring that is needed to record the crash test data.

Bodyshell is rated as stable and is capable of withstanding further loadings. Footwell area is considered stable. The vehicle offers seatbelt reminder SBR as standard for driver. The model tested has 2 airbags. The adult safety rating for a max of 17.00, stands at 14.08 for Honda Amaze. Watch the crash test video of Honda Amaze below.

While adult protection is in the green, child protection doesn’t fare well, at all. Using the child seats recommended by Honda, Amaze acquired a one-star rating for Child Occupant Protection. During safety testing, the child dummies contacted the interior of the car, pointing to evidence of head exposure, and probability of injury. Full report of crash test on Honda Amaze is as mentioned below.