The Civic happens to be one of most loved brands from Honda in India. Globally too, it is one of those rare brands which have seen 10 proper generation changes. It is sold in multiple body types like Sedan, Coupe and Hatchback, however the Indian market only got the sedan version in the past.

Though the car has been on sale since 1973, India got the Civic when it was already in its 8th generation, in 2007. The car garnered huge praise from all corners. It continued to be on sale till 2012, when the high difference between petrol and diesel prices forced people to switch over to diesel models. Things became economically more difficult for Honda as consumer preference in the INR 15 lakh+ range started to sway towards diesel SUVs. Simply put, the 1.8-litre petrol gulping Civic didn’t make a lot sense for many customers and unsurprisingly, Honda discontinued the moniker. 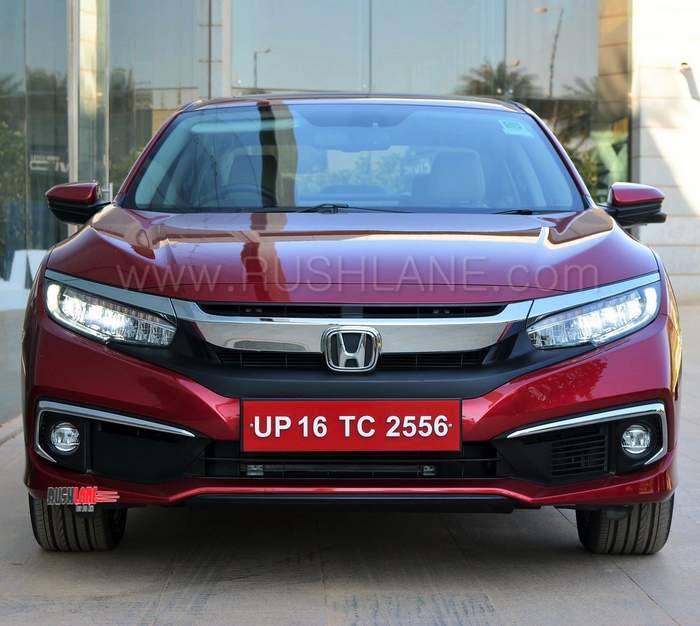 Come 2019, and things have changed significantly, the gap between the petrol and diesel prices have reduced to around Rs 10. Government regulations (10-year limit) in select states like Delhi pursue customers to not get a diesel and just in case customers still want one, Honda now has the 1.6 litre Earth-Dreams iDTEC diesel motor (currently available on the CR-V). So, Honda thinks that it is the perfect time to relaunch the Civic brand! But, is it? We were recently invited by Honda to Bangalore to test-drive the All New 2019 Civic. And we here is our first impression of the car!

Exteriors – Civic is an iconic brand in India, and it is fair to draw comparison between the two generations of models (8th and the 10th). While the 8th-gen model looked futuristic, its design was still mature and well composed. Even in 2019, it doesn’t look dated. Talking about the 10th-gen model, we are sure that the opinions will mostly be divided. Yes, it is more aggressive, masculine, has a ton of chrome highlights and some fancy LEDs and lights. However, it might come out as a little too loud from certain angles. 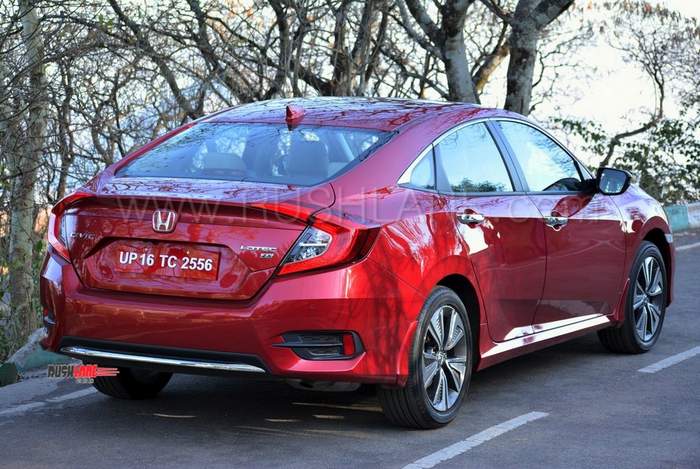 Talking about specifics, the front holds a bold chrome grille which lands up being the centre-piece. The top-end variants gets LED headlamps while the lower-end grades get Halogen projector units. LED DRLs cup the headlamp units from the sides and add to the overall aggressive stance. Technically, as the 10th generation Civic was launched way before the 2018 Amaze, it is the Amaze which took inspiration from the Civic. However, as the Amaze came in the country earlier, it might look as if Civic is an elder cousin of the Amaze.

Come to the sides and the Civic will wow you with its coupe like design. We were told that for the Indian model, Honda had to increase the ground clearance of the Civic by 20mm, over the international variant. As far as numbers are concerned, Honda informed that it has 2mm more ground clearance in full-laden condition than the current-gen City. 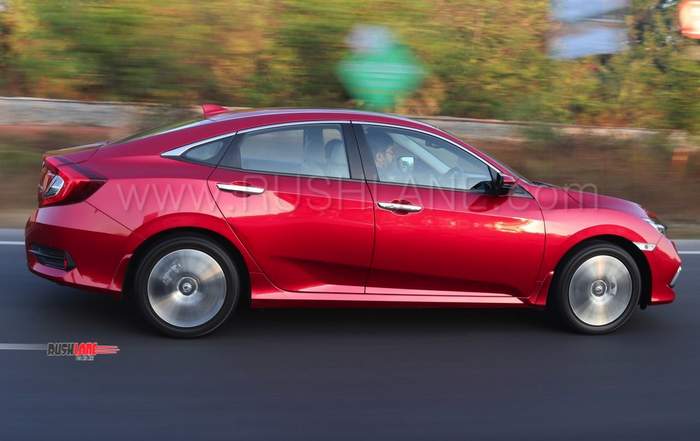 The top-end grades of the sedan get interesting 17” alloys while the lower end variants get 16” alloys. Rear profile looks a little edgy where the large LED tail-lights draw majority of attention.

Interiors – As the Civic shares its platform with the CR-V, there are considerable similarities which you can spot on the inside of the car. There are parts and components which have been lifted directly from the CR-V, but hey, that is a good thing! The steering is a typical Honda unit while the steering mounted controls resemble the ones on the CR-V. Instrument cluster is all TFT which makes it look very modern, a department in which the previous Civic too stood-out! 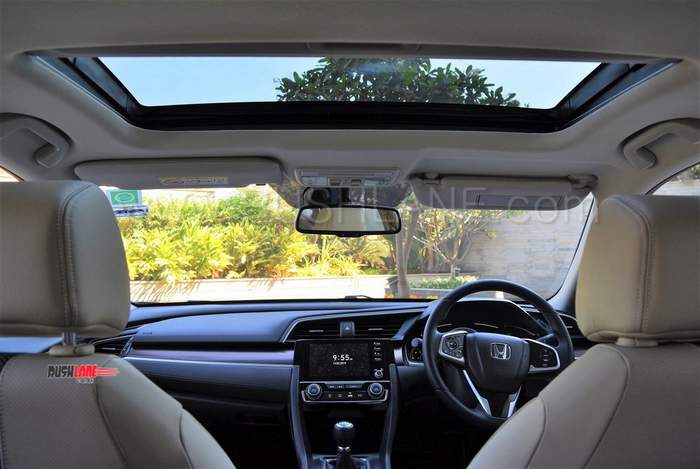 For connectivity, there is a 7-inch touchscreen infotainment unit which provides Android Auto and Apple CarPlay support. The interface is easy to use, and the speaker system is simply fantastic! Quality of materials, be it plastics or leather, is good. The seats come with beige upholstery and ensures that the cabin looks large. The sunroof further accentuates the airy feel in the cabin. 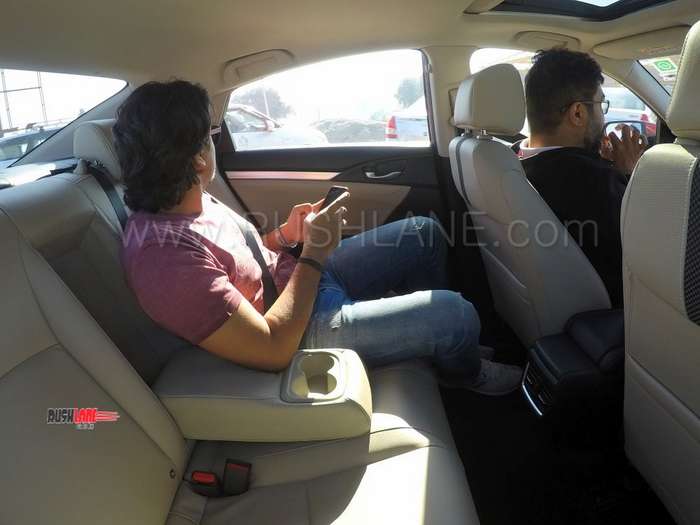 Seating position at the front is relatively low, but is comfortable. Rear occupants too manage to get enough head-room, despite the coupe-like roofline. Being a wide car it ensures that there is enough shoulder room, however, the rear-thigh support could have been better. Another thing which rear passengers miss out on is USB charging sockets, which should have been added! 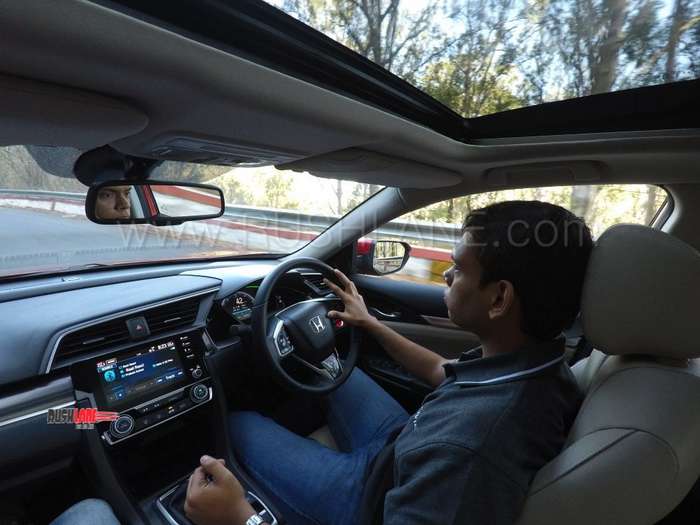 Driving Dynamics (1.6 litre iDTEC) – Honda has introduced the 1.6 litre iDTEC (120 PS/300Nm of torque) diesel engine along with a 6-speed Manual Transmission. It is the same diesel motor which was brought in with the 2018 CR-V, however, this time it comes mated to a manual transmission. Diesel’s haven’t been Honda’s natural forte but still the 1.6 litre unit comes out as a torquey unit in the under 2500 RPM area. The 6-speed MT compliments it well and the shifts are clear and confident. It feels more enjoyable to drive on the Civic, than the CR-V. Below is a 0-100 kmph acceleration video.

However, if compared to the likes of diesel units of the competition, it isn’t a performance focused unit. Also, the fact that diesel clatter still creeps in, further deteriorate the overall experience. What is impressive though is the astronomically high fuel efficiency, which stands at 26.8 kmpl (claimed). Even when we pushed the car hard on the straights and took it around for a small climb at Nandi Hills, the car returned a commendable fuel economy of 14.5 kmpl. So, should you plan to drive in a civic manner, the Civic diesel will happily provide you a fuel economy of ~18-20 kmpl. 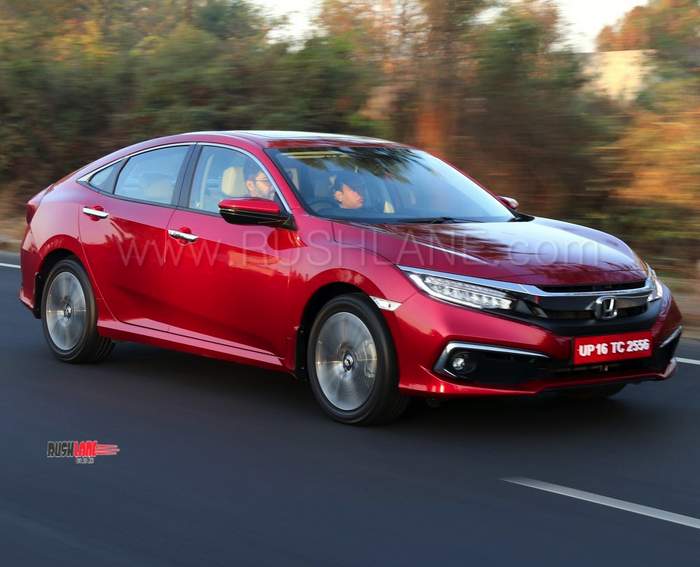 Driving Dynamics (1.8 litre iVTEC) – The 1.8 litre i-VTEC happens to be one of the best engines which Honda introduced in the country. The engine remains the same in the current generation model and churns out 141 PS and 174 Nm of torque. It has been mated to a CVT unit. The combination is good for your daily in-city office commute but fails to offer an adventurous ride. The moment you press the pedal hard, CVT’s rubber-band effect comes out strongly, and it takes away the driving fun. Disappointed that there is no MT on offer or else, that could have been a winning combination in the segment!

Ride and Handling The Civic has a long wheelbase and a fairly large wheel-track as well. This, along with the new platform have ensured that just like the previous generation Civic, this one too handles beautifully. Suspension setup is aptly tuned for Indian roads, so, no complaints on that note. As mentioned earlier, Ground clearance too has been increased so there are lower chances that your car’s bottom will scrape over majority of the speed-breakers which Indian roads have to offer. 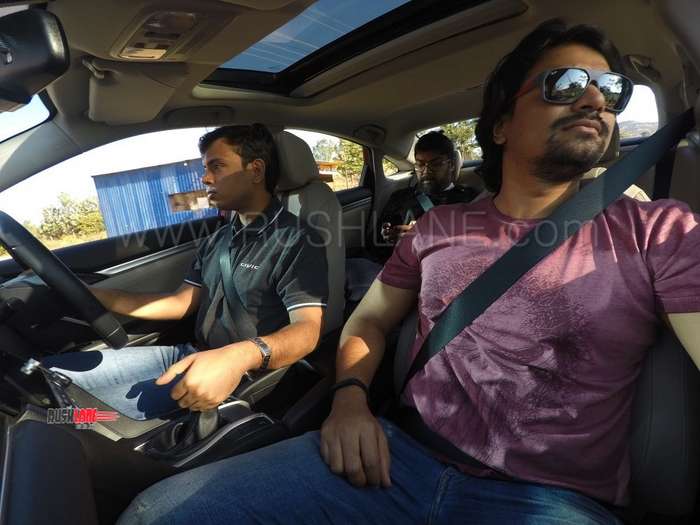 Safety – Internationally, the Civic had scored a 5-ster ASEAN NCAP rating, thanks to multiple safety systems it comes along with. The highlights being 6 air-bags, ISOFIX seat mounts, Vehicle Stability Assist, Hill Start Assist, ABS amongst others. Just like the CR-V, it too gets a camera on the left-ORVM, which practically eliminates blind-spots when you are shifting lanes!

Launch & Pricing The launch of the Civic is scheduled for 7th March, 2019. As Honda won’t be launching a Petrol MT model, pricing will arguably start a little higher than the competition. We expect the pricing (ex-showroom) to be in the INR 17.5-21 lakh range. 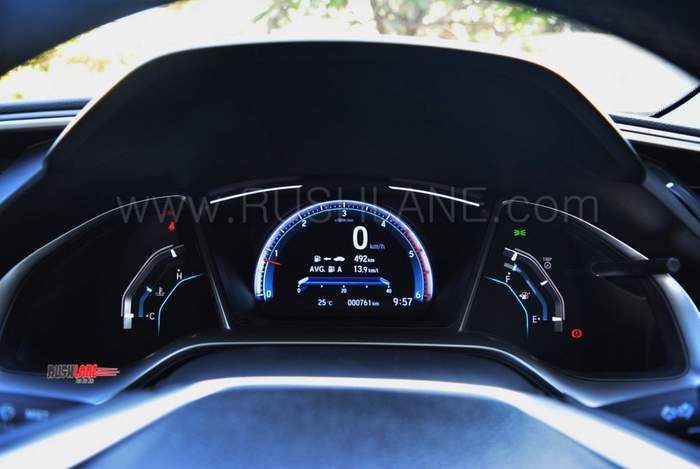 Verdict – The Civic has always been a driver’s car with a strong focus on futuristic styling. This time too, Honda has got majority of the things right, however what we really missed was the Manual Transmission in the 1.8 litre i-VTEC petrol motor. Honda states that their internal research showed that consumers in this segment didn’t want a Petrol MT and hence bringing it in the country didn’t make economic sense to them. However, we believe that it was the MT clubbed with the fantastic 1.8 litre engine which made Civic the icon it became in the country.

The segment itself doesn’t see a lot of sales, with monthly averages ranging in the 400-500 units territory (Elantra manages around 125 units per month while the Corolla Altis averages around 250 units a month). If Honda decides to price the Civic with a premium, it might find it difficult to attract considerable buyers. 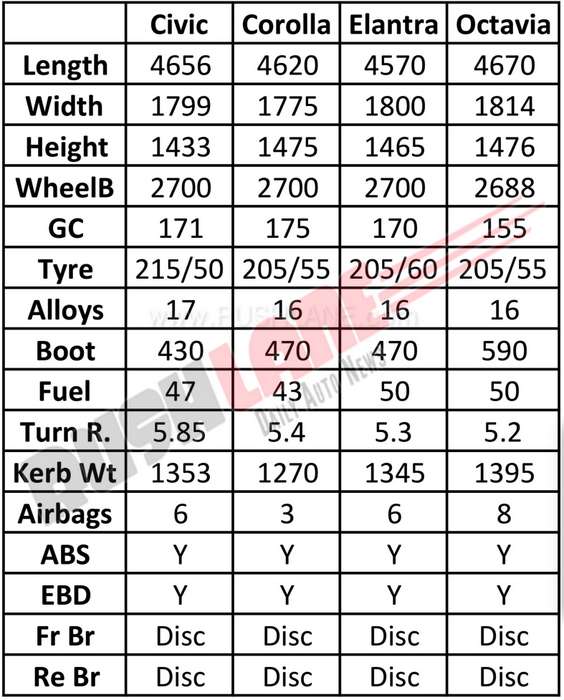 The petrol unit is good if your commute is going to be majorly in-town and the diesel makes sense if you travel often between cities, want to make a style statement with your car but limit your trips to the gas-station. If you are looking out for the old driving fun in a Civic, it is the diesel one which comes closer, however it cannot emulate what the previous generation petrol-MT did. 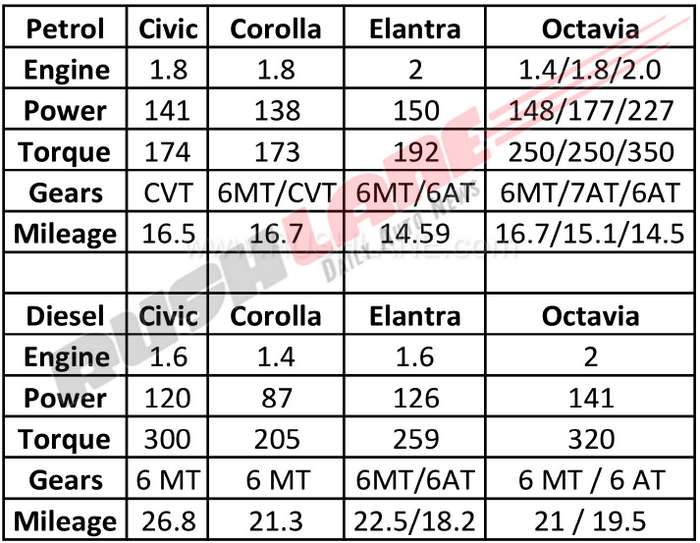 Disclosure: For this review, Honda invited and hosted us at Bangalore, and paid for our travel, stay, and food.