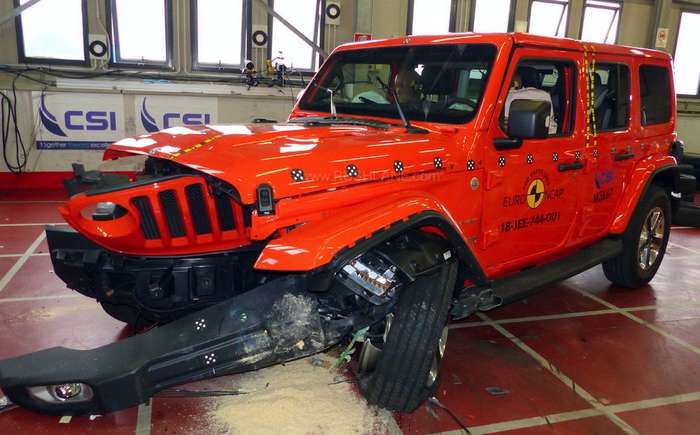 The 2019 Jeep Wrangler, introduced in Australia and New Zealand in April 2019, has been given a 1 star ANCAP rating. ANCAP Chief Executive James Goodwin has stated, “The safety performance of the Wrangler is limited, falling well shy of the expected standard in three of the four key areas of assessment.”

This 1 star safety rating issued to the Jeep Wranger by ANCAP is same as the 1 star rating given by Euro NCAP in Dec last year. The crash tests were carried out on the Jeep Wrangler four door variant with a diesel engine. However, the safety performance of the two door, petrol variant is not expected to be any different from its four door counterpart.

In terms of safety, dual frontal and combination side airbags, offering chest and head protection to occupants in the front seats was found to be standard. There was also no head protecting side airbags for rear seats. It was found that the passenger compartment also did not retain structural integrity while connection between A Pillar and cross facia beam was found not upto required standards. Below is the crash test report.

It was also the same in the footwell structure. Structure on the dashboard was a likely source of injury to driver and passenger while protection of upper legs was rated as ‘marginal’ as was rearward displacement of pedals, footwell rupture, protection to driver’s feet and chest. Protection to rear passenger neck was rated as ‘Weak’, chest protection was ‘Poor’ based on dummy readings and rating was ‘Good’ where other critical body regions were concerned along with a ‘good’ rating for side impact test.

In terms of child occupant protection, frontal offset tests showed as ‘Good’ for a 6 year old dummy for all body regions. Protection of neck of a 10 year old dummy was ‘Weak’ and ‘Adequate’ for chest. For pedestrian safety, the Jeep Wrangler was rated as ‘Poor’ or ‘Adequate’ for protection to the head of a pedestrian. Protection to pelvis was ‘Good’ while protection offered to legs was rated as ‘Good’ and ‘Poor’. Since autonomous emergency braking is available only on some variants of the Jeep Wrangler, the system was not tested and lane support system is also not available.

New Jeep Wrangler has been spotted on test in India. It is expected to be launched later this year with petrol and diesel engine option. Expect launch prices to be in the range of Rs 60-70 lakhs, ex-sh.