It was back in late 2018, that Kawasaki India opened official bookings of the new 2019 Ninja ZX 6R. In Jan 2019, the bike was officially launched, at a starting price of Rs 10.5 lakhs, ex-showroom. But in spite of launch, deliveries had not started. Now, first unit of the 2019 Kawasaki Ninja ZX 6R has been delivered to the owner.

Speaking on the epoch-making occasion, Mr. Naoki Matsumoto – Managing Director, India Kawasaki Motors Pvt. Ltd. said, “The Ninja ZX-6R created a great stir when its entry in Indian market was announced. Because the Ninja ZX-6R is an ambitious project for us, starting deliveries of the Ninja ZX-6R is indeed an exciting moment. We hope that our customers relish riding Ninja ZX-6R on streets as well as on race tracks.” 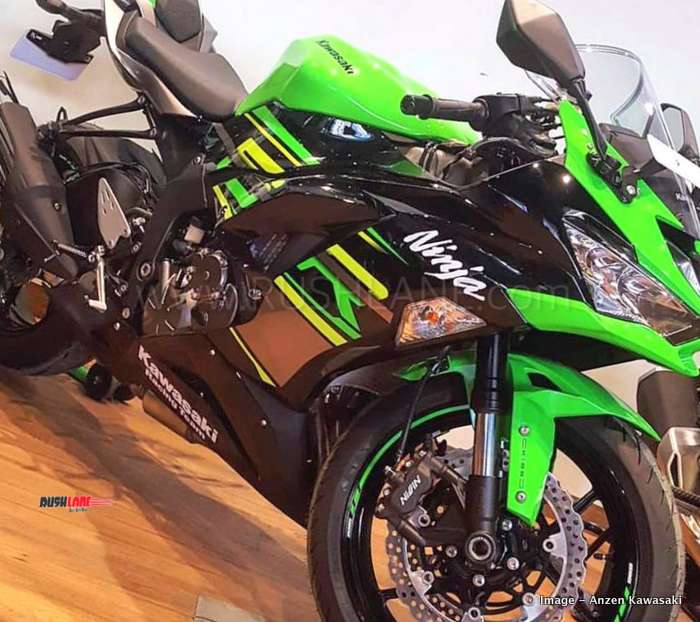 The highly anticipated supersport bike will be available in two colors—Pearl Storm Gray / Metallic Spark Black or Metallic Spark Black / Metallic Flat Spark Black. In the company line-up, it is positioned below the flagship ZX-10R. It comes in with a sculpted look, LED head and tail lamps, restyled windscreen and exhaust system while the tail section also sports a new design.

2019 Kawasaki Ninja ZX-6R receives a combination analog / digital gauge cluster, as can be seen in the video below. It is built on an all aluminum perimeter frame. It boasts of a light weight construction with adjustable Showa SFF-BP forks in the front and fully adjustable UNI-TRAK at the rear. It also receives adjustable traction control with three levels of adjustment and riding modes.

Also on offer is Kawasaki Quick Shifter. Braking is via 310mm twin disc set up in the front 220 mm single disc at the rear – along with Kawasaki Intelligent anti lock Braking system. Kawasaki has fitted the Ninja ZX-6R with 17 alloys, with new Bridgestone Battlax Hypersport S22 tyres, which enhances performance when taking on the racing tracks.

Kawasaki will bring Ninja ZX-6R to India via the CBU route. New import norms has allowed manufacturers to bring in 2,500 vehicles a year without the need for homologation; provided the vehicles comply to international homologation. The new ZX-6R is homologated internationally, and also meets new emission standards being introduced in the country. There is no direct competition to the ZX6R in India, but in the price range, it will compete with the likes of Triumph Street Triple RS.