The international motorcycle community has been waiting with bated breath for the KTM 390 Adventure. The motorcycle was originally expected to make its world premiere at last year’s EICMA in Milan but the Austrian brand decided to make the prospective customers wait further. For several months now, the motorcycle has been spotted testing in Europe as well as in India where it will be made alongside its compact and medium displacement siblings.

Based on the Duke 390 platform, the 390 Adventure promises to offer best-in-class performance with long distance touring capability. If the prototypes spotted in public are anything to go by, KTM is likely to come up with two variants of its smallest adventure tourer. The off-road focused variant would have spoke wheels wrapped by knobbies while the mainstream model will be equipped with alloy wheels and milder dual-purpose tyres. 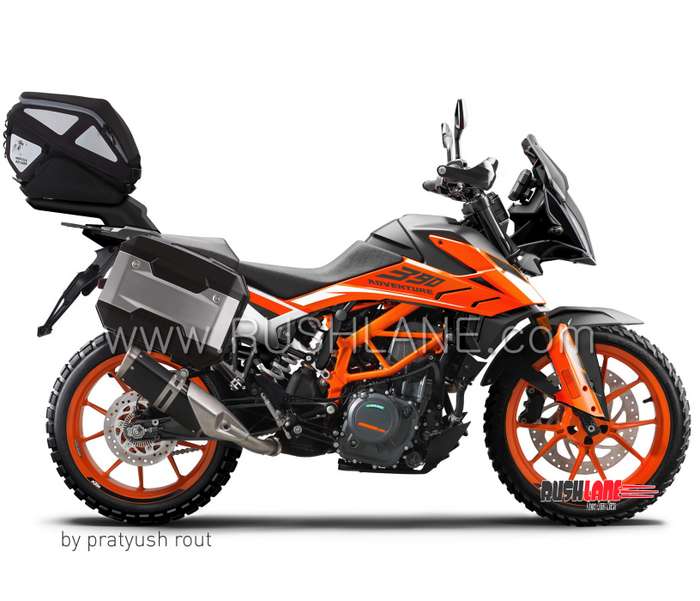 Our rendering is based on the latter version which has been spotted testing in India, complete with accessories like panniers, and top box. KTM is expected to have a long list of touring accessories like storage solutions, mobile charger, navigation system, etc, on offer from the launch.

The prototypes reveal that the 390 Adventure will adopt the Duke 390’s trellis frame but with a new sub-frame and suspension geometry. Both front and rear suspension systems would have longer travel (prioritizing comfort and off-roadability rather than aggressive handling like the Duke). The motorcycle will have an upright riding stance and comfortable seats.

Powering the 390 Adventure will be the same 373.2 cc liquid-cooled single-cylinder engine that also serves the Duke and RC models. The motor produces 44 PS and 35 Nm of torque in its current state of tune. Needless to say, ratios of the 6-speed gearbox would be tweaked to offer better low-end torque.

In terms of equipment, the KTM 390 Adventure will get a fully digital dashboard, dual-channel ABS, riding modes, LED headlamps, etc. The motorcycle will be made in India for global consumption and that means, it will be attractively priced in our market like the Duke. With an estimated price tag of INR 2.75 lakhs (ex-showroom), the KTM 390 Adventure would significantly undercut its primary rival, the BMW G310GS which retails at INR 3.49 lakhs (ex-showroom).