2019 KTM 390 Adventure, the off road motorcycle that was awaited by enthusiasts all through 2018, and which was expected to make its appearance at the 2018 EICMA Show, but did not, is now spied on test in India; in what seems like production ready guise.

KTM 390 Adventure could launch in India sometime in March 2019, and will be the third addition to the KTM 390 family following the RC 390 and 390 Duke. Slated to be priced around Rs. 3 lakhs, the new KTM 390 Adventure will appeal to adventure bike lovers in the country. 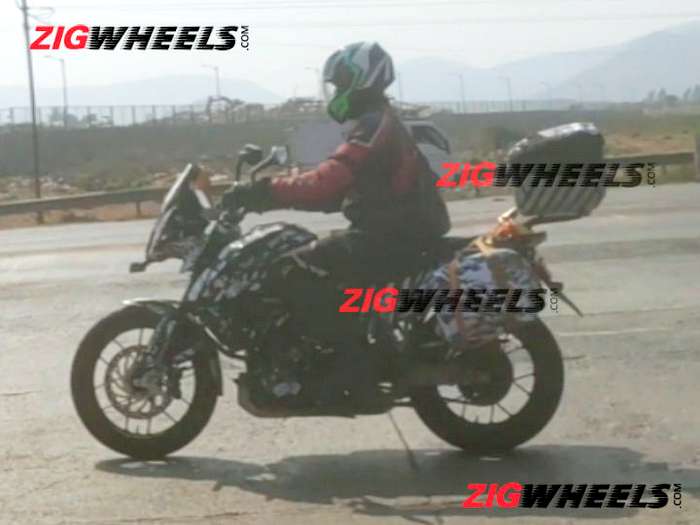 The 390 Adventure also gets long travel suspension, adjustable front forks and preload adjustable monoshock at the rear. Braking duties are carried out by disc brakes on both wheels and dual channel ABS. It receives an LCD TFT instrument cluster and smartphone connectivity and Bluetooth connection.

Engine specifications on the KTM 390 Adventure will include the same engine that is seen powering the KTM Duke 390. This 373.2cc engine offers 43.5 bhp power at 9,500 rpm and 35 Nm torque at 7,250 rpm mated to a 6 speed gearbox. However, this engine will be tweaked for lower end and mid range torque curve for better off roading performance.

The test mule was spotted on the outskirts of Pune, near the Bajaj plant from where it will be produced. It will carry a price tag of around Rs.3 lakhs and will compete with the likes of Kawasaki Versys X300 and BMW G310GS, once launched in the country.