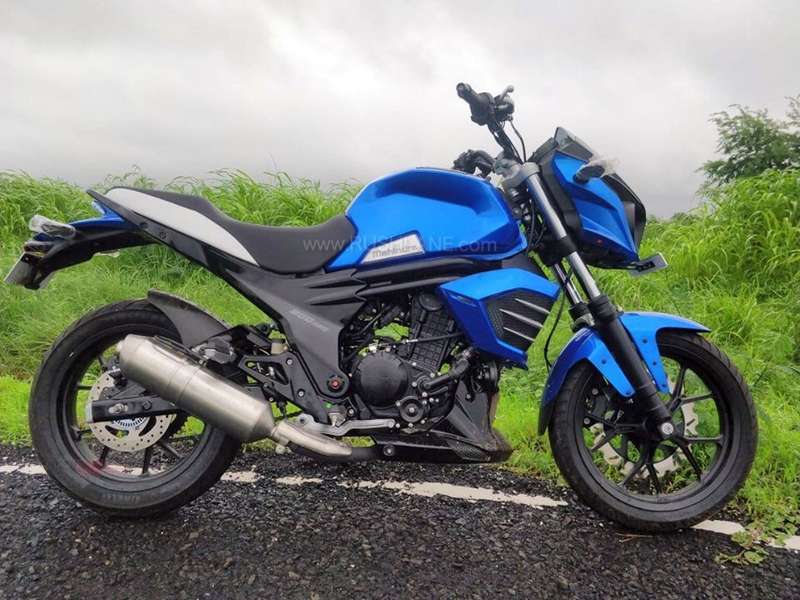 Equipped with dual-channel ABS, Mahindra Mojo had made a comeback last month. However, apart from the ABS, the bike does not get any major updates. Mahindra has in fact removed certain features that were available in earlier versions. This has probably been done to keep costs in check. Also, Mojo now comes in a single variant and earlier models XT 300 and UT 300 have been discontinued.

In terms of colour options, Mojo ABS is offered in all-black paint scheme. However, a dealer in Bengaluru has given Mojo a blue makeover, which looks absolutely stunning. The blue shade is probably inspired by Mojo UT 300 that also had a similar blue colour.

However, use of blue is more liberal on Mojo ABS, as compared to UT 300. In UT 300, blue was limited to the fuel tank and front cowl, but in Mojo ABS, blue can also be seen on the radiator, front fenders and tail section. 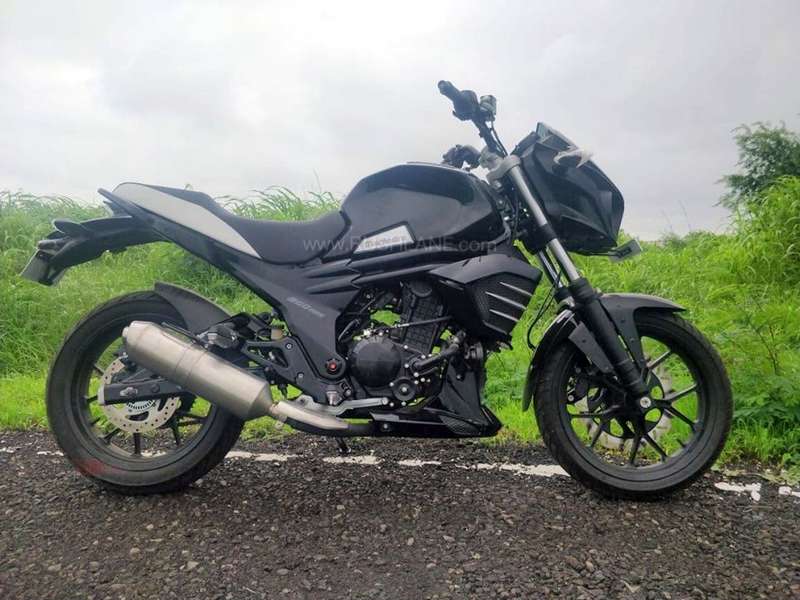 This gives the bike an almost dual-tone colour scheme, as most other parts such as engine, front suspension, engine guard, swingarm, rear tyre hugger, and alloy wheels are done in black. However, Mahindra Mojo is officially offered in solid colours only. It is not certain if dual-tone colour options would be introduced for new Mojo.

Other key changes on Mojo ABS include single side exhaust, black coloured frame that replaces the earlier golden frame, and conventional telescopic forks in place of USD forks. The bike misses out on LED headlamp, LED DRLs and slipper clutch. However, there’s one key upgrade in the form of Bybre radially mounted callipers that work with the 320 mm petal disc at the front. Rear disc is 240 mm and comes with floating callipers.

Engine is the same 294.72 cc liquid-cooled, single-cylinder unit as earlier, but power output has undergone some slight adjustment. Mated to a 6-speed transmission, the engine on Mojo ABS makes 26 hp power and 28 Nm torque. This is a midpoint, as compared to earlier XT 300 and UT 300 that delivered 27 hp / 30 Nm and 23 hp / 25.5 Nm, respectively.

With its reduced rake angle, Mojo ABS will offer improved handling in city conditions. The bike weighs 181.5 kg (wet) and its ground clearance is 165 mm. It is priced at Rs 1.89 lakh, which is higher than Bajaj Dominar 400 (Rs 1.80 lakh), ex-sh prices. In the future, we could see an electric variant of Mojo, which is reportedly being developed by Mahindra.