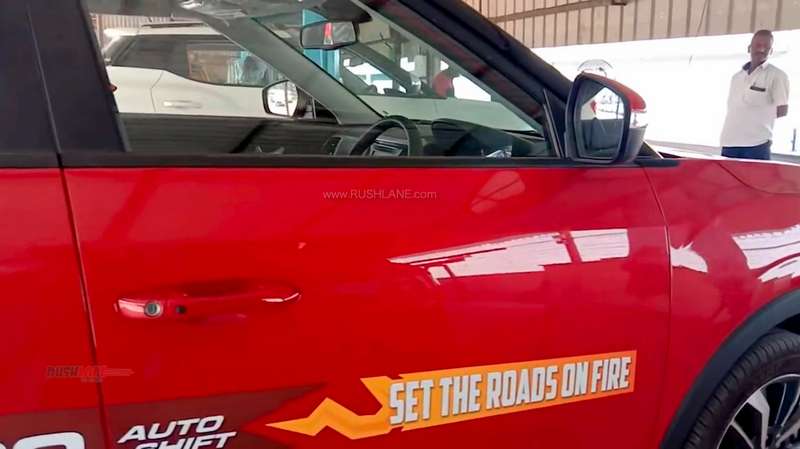 Mahindra XUV300 was the second best selling car in the segment. But with the launch of Hyundai Venue, it is now the third best selling car. Currently offered only with manual transmission, the company will soon launch AMT variant of the XUV300 in order to boost sales.

All rivals of XUV300 are offered with automatic or AMT option. Maruti Brezza and Tata Nexon get AMT, Hyundai Venue gets DCT while Ford EcoSport gets conventional automatic transmission. In today’s date and time, due to rise in traffic jams, more and more car buyers living in the cities are looking to purchase automatic options, as they provide ease of driving as compared to manual transmission in traffic conditions.

Test drive units of the 2019 Mahindra XUV300 AMT has started arriving at dealerships. A first look walkaround video of the car has now been posted by AutoTrend TV, which can be seen below.

The car in the video is the Mahindra XUV300 AMT top end W8 trim, seen with Auto-Shift badging on its tail gate. In terms of exterior design, the XUV300 AMT sees no change and is identical to its non AMT variant. It gets several first in segment features such as dual zone automatic climate control, heated ORVMs and safety features among which are a total of 7 airbags, all four wheel disc brakes and steering modes.

This 1.5 liter diesel engine is the same as that offered in the Mahindra Marazzo MPV which will also get an AMT option by early 2020. While the AMT unit in the XUV300 will be a Magneti Marelli unit for the present, Mahindra is expected to replace this with a torque converter from Aisin once the BS-VI variant of the SUV is launched in the country.

Where pricing is concerned, Mahindra XUV300 AMT variant could be priced by around Rs.30,000- Rs 50,000 over its equivalent manual transmission variant. The AMT option could be available from the mid spec W6 variant onwards with prices set to start from around Rs.9.5 lakhs for petrol and Rs.10 lakhs for diesel. The Mahindra XUV300 AMT will take on the Maruti Suzuki Vitara Brezza AMT, Tata Nexon AMT, Hyundai Venue DCT and Ford EcoSport automatic.

Mahindra XUV300 has been seeing enormous success in the country ever since launched selling around 5,000 units per month. Launch of AMT variant later this month will help boost sales.