Maruti Suzuki India launched the new generation WagonR back in Jan 2019. At that time, it was offered only with petrol engine options of 1L and 1.2L. It was expected Maruti to launch dual fuel option of CNG and LPG with WagonR at the time of launch itself, but that did not happen.

But with petrol options not managing expected sales, the company has now launched CNG petrol dual fuel option in India. Priced from Rs 4.84 lakhs for the LXi trim and Rs 4.89 lakhs for the LXi (O) trim, the WagonR CNG is only offered in two variants. Both are powered by the same 1.0 liter three cylinder engine. Comparing price of WagonR CNG with that of respective petrol powered variant, it is an increase of Rs 65k. 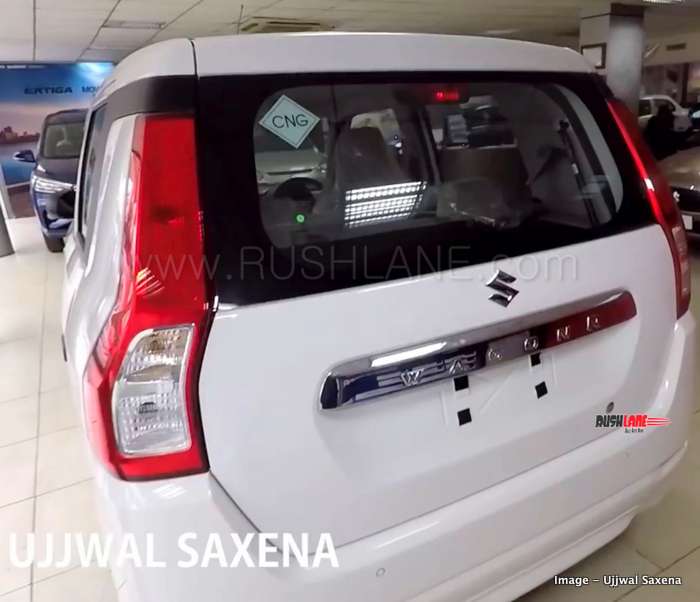 The 1 liter engine board the WagonR CNG delivers 68 PS and 90 Nm torque via 5 speed manual transmission. It is mated to a 5 speed manual transmission. Mileage claimed by petrol variant is 22.5 kmpl and that by CNG WagonR is 33.45 km/kg. The CNG tank is placed in the boot, along with the spare wheel, this more or less makes the boot space useless. Take a detailed look of WagonR CNG in the first walkaround video below. Video is created by Ujjwal Saxena.

New Maruti WagonR CNG gets a more contemporary exterior design as compared to that seen on its earlier counterpart even as its continues with its tall boy architecture. It gets redesigned wheel arches with a flared stance, split headlamps and new tail lamps. The new WagonR also uses upto 40 percent higher strength steel in its construction making it both lighter and safer than its predecessor. In spite of being larger than before, weight has been reduced by 65 kgs. Maruti hopes to receive sales boost with this new launch.