Bookings have been opened for the new Maruti Suzuki WagonR that launches in India on 23rd January 2019. Ahead of launch, the new WagonR has been completely revealed by the company. Latest video from Maruti Suzuki, details the WagonR like never before.

2019 Maruti WagonR first look video confirms the presence of interesting new features and design updates. The unique dual split headlamps in the front are now housed on the upper half of the front assembly. The setup receives pilot lamps and indicators on its lower half, but is missing LED DRLs. 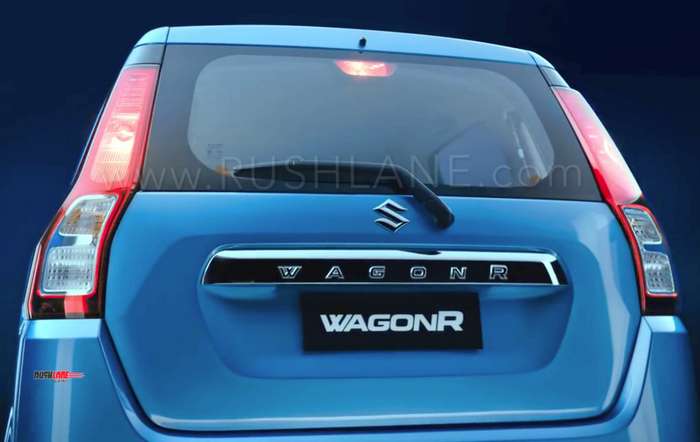 The video also shows scoops around wheel arches giving them a flared look though the WagonR will not receive alloy wheels and will get 14” steel wheels instead. The tail lights sport a vertical design and are positioned higher on the rear windscreen while a chrome strip with the name is seen over the license plate. 2019 Maruti WagonR also receives a floating roof design with black cladding on B and C pillars, rear windscreen washer and wiper and rear parking sensors.

Cabin comforts on the new WagonR, which is seen in a black and beige dual tone color scheme, includes steering mounted controls, all 4 power windows, a 7.0” touchscreen infotainment system and safety features among which are dual airbags, ABS, EBD, seat belt reminder, speed alert system and rear parking sensor. It will, however, not receive either adjustable headrests or rear arm rests. Take a look at the first look video below.

The new WagonR which is now based on Suzuki’s Heartect platform that also underpins the Swift and Ignis, will be powered by two engine options. The 1.0 liter, 3 cylinder engine is the same as that seen on the current WagonR. This engine makes 68PS power and 90 Nm torque mated to a 5 speed manual gearbox and AMT. The 1.2 liter, 4 cylinder engine, which does duty on the Swift and Ignis, offers 89 bhp power and 113 Nm torque also mated to a 5 speed manual and AMT. The 1.0 liter engine will be seen powering the L, V and V AMT variants while the 1.2 liter engine will power to V and Z manual as well as AMT variants.

Maruti WagonR will get three variants of L, V and Z and in six color options of blue, brown, grey, orange, silver and white. It will continue to sport its tall boy design though the overall body is more in line with more premium offerings from Maruti Suzuki. The new Maruti Suzuki WagonR is slated to be priced between Rs 4.5 to 6 lakhs and will rival the Hyundai Santro, Datsun GO, Tata Tiago and Renault Kwid.