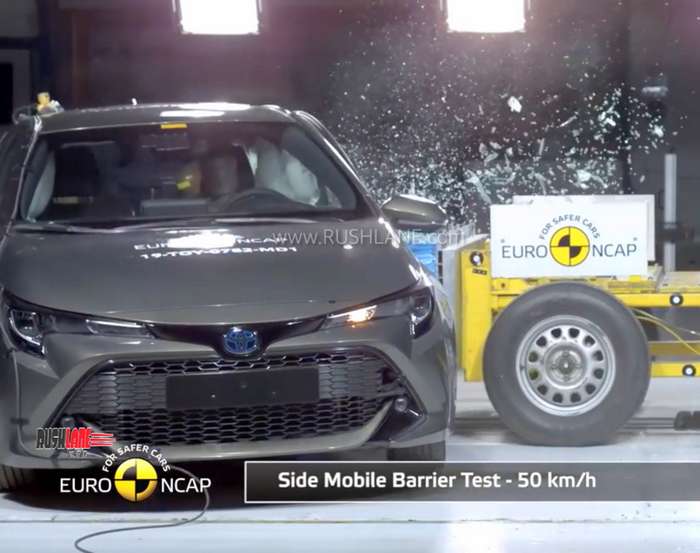 Euro NCAP has crash tested the all new 2019 Toyota Corolla. Based on the new TNGA platform, 2019 Corolla is on offer as a sedan as well as a hatchback. It is the hatchback version which has been crash tested. The new gen Corolla is yet to be launched in India. To be launched here next year, it will be sold only in sedan format.

Speaking about the crash test result, the new Toyota Corolla has scored a 5 star safety rating in Euro NCAP. For adult occupancy, it scored 95% rating, 84% for child occupants, 86% for pedestrians and 77% for safety assist.

As per the experts at Euro NCAP, “The passenger compartment of the Corolla remained stable in the frontal offset test. Toyota showed that a similar level of protection would be provided to occupants of different sizes and to those sitting in different positions.” Watch the crash test video below.

The new 12th gen Corolla sedan will be positioned on the Toyota New Global Architecture (TNGA) platform. It will see increased dimensions as compared to its current counterpart. It will measure 4,640 mm in length, 1,780 mm in width and 1,735 mm in height. This makes it 10 mm longer, 5 mm wider and 45 mm lower than its earlier counterpart while wheelbase is the same at 2,700mm. In comparison to the current model, the new Corolla will also get lower center of gravity and wider treads.

Engine specifications will include a 2.0 liter petrol engine offering 171 hp power and 205 Nm torque mated to a 6 speed manual and CVT. A hybrid powertrain will also be offered in around 90 out of the 150 markets where the new Corolla is going to be launched. Even in India, the launch of hybrid Corolla is planned.

Speaking about design, the exteriors of 12th gen Toyota Corolla will be seen with distinctive styling elements. It will receive swept back headlamps, L shaped LED DRLs, a large trapezoidal front grille, C shaped fog lamps and at the rear, it will be seen with L shaped tail lights, a new bumper and integrated reflectors.

Interiors also sport some changes. It will receive a new all black color scheme with new dashboard design, floating touchscreen infotainment system, twin dial instrument cluster and a 3 spoke multifunction steering wheel. The new Toyota Corolla will be equipped with safety features among which will be multiple airbags, ABS, collision avoidance and mitigation system, active lane departure warning, road signal recognition, active steering and radar guided cruise control. It will compete with the Skoda Octavia, Hyundai Elantra along with the new Honda Civic.