RUSHLANEDAILY AUTO NEWS
HomeCar NewsToyota Rush spied on a truck in India is heading to another... 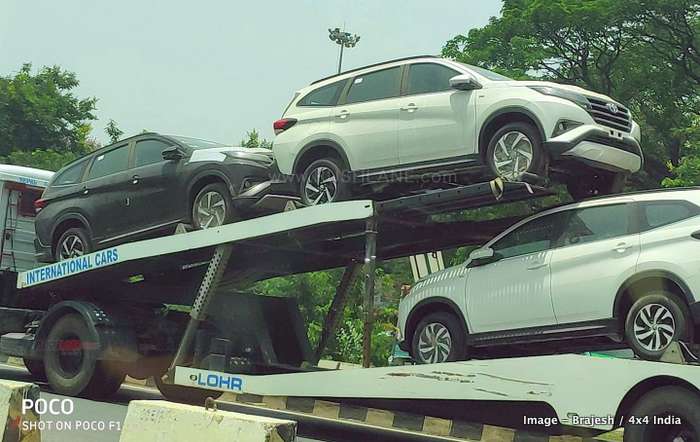 The latest Toyota Rush SUV has been spied in India. Not 1, not 2, a trailer filled with the 7 seater SUV. The photo and video was shared by Brajesh Singh on popular Facebook Group – 4×4 India. Yes, it is true that Toyota is working on launching a C segment SUV, which will most likely be the next gen Rush in India, but the one that has been spied on the trailer in the photo above, is not for India.

The Toyota Rush you see in the image, is most likely an import which is in transit. Car buyers in countries like Nepal and Bhutan, which do not have any ports, usually import cars via India. Their dealers / distributors order cars from South East Asian countries like Thailand / Indonesia, which are then shipped to Kolkata in India, and then from here, these are transported to Bhutan / Nepal via road.

Toyota Rush is not the only car which has been spotted in India. Many enthusiasts in the region spotted Honda HRV, Toyota Hilux, Nissan Navara, etc. All of these are not on sale in India, but are seen regularly in the region, being transported on a truck. There is also the badge of LOHR International Cars sticker on the truck. LOHR is one of the world’s largest car transport company. Considering that countries like Nepal and Bhutan do not have any car manufacturers, they usually import cars from abroad.

Speaking about the new Toyota Rush, it is on sale in Indonesia where it is priced from IDR 239.9 million – which equates to INR 11.5 lakhs in India. Based on the Daihatsu Terios, Toyota Rush SUV measures 4,435mm in length, 1,695mm in width and 1,705mm in height while wheelbase measures 2,685mm. True to its SUV stance, Toyota Rush gets a wide front grille, flared wheel arches, LED headlamps and overall matte black cladding while it sits on two tone 17” alloy wheels.

The 7 seater Toyota Rush has a spacious cabin. It gets comfortable seating and a host of driver and passenger comforts. The global spec model is seen with a 7” touchscreen infotainment system, 8 speaker audio system, automatic climate control, push button start, 6 airbags, vehicle stability control, hill start assist and ABS and EBD which are offered as standard.

In global markets, the Toyota Rush gets its power via a 1.5 liter petrol engine also seen powering the Toyota Yaris. This engine offers 104 PS power and 136 Nm torque but is mated to a 5 speed manual or 4 speed automatic transmission unlike the Yaris which gets a 6 speed manual.

Toyota has tied up with Suzuki to develop a new gen SUV for India. This will be a C segment SUV, to take on the likes of Hyundai Creta, Tata Harrier, Jeep Compass and so on. It will sit below the Innova Crysta in company line-up. Expected to be offered in a price range of Rs 15-20 lakhs, launch will take place by 2022. The current Toyota Rush which you see in the image above, is most likely never launching in India.