New Yamaha MT15 was shown to authorized dealers recently, which confirms that the India spec Yamaha MT15 is on its way. This naked streetfighter version of R15 V3, called the Yamaha MT15, enters the 150cc premium segment in India and guarantees both style and performance.

2019 Yamaha MT15 stands out in a crowd. It gets a distinctive bug eyed LED headlamp, a sculpted fuel tank and slim tail section. It will be seen in a single seat layout and well designed handlebars offering a comfortable ride over longer distances. It will also sport a sculpted fuel tank offering better grip for the knees and a fully digital instrument cluster.

2019 Yamaha MT15 will measure 2020 mm in length and 800mm in width, 1070 mm in height. It has a wheelbase of 1335 mm and gross vehicle weight stands at 288 kgs. These details were revealed in a leaked govt document, which is now circulating on the internet. The bike will sit on 17” 10 spoke alloy wheels fitted with 110 section tyres up front and 140 section tyre at the rear. Though the global model gets upside down fork in the front, the India spec MT15 gets conventional forks in the front and monoshock suspension at the rear, as seen on the R15.

The new Yamaha MT15 will get its power via a 155cc, single cylinder, SOHC, liquid cooled engine. It is the same engine, which powers the R15. This engine makes 19.3hp and 15Nm of peak torque. It is tweaked for better low and mid range performance and mated to a 6 speed transmission. 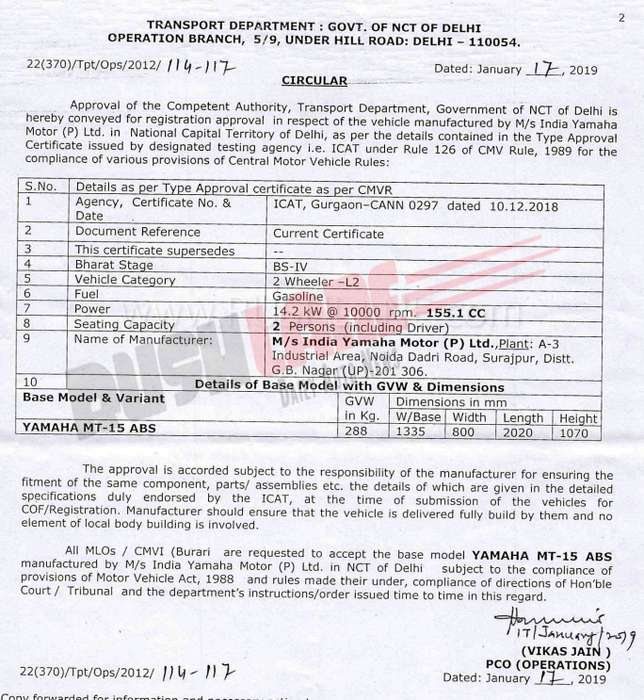 Reduced weight, as compared to R15, will ensure that the new Yamaha MT15 is ideally suited for performance. The engine could get slip and assist clutch and be seen with Variable Valve Actuation technology. Braking will be via disc brakes at both ends while ABS will be offered as standard so as to comply with new safety regulations being implemented in the country.

No prices have also been revealed but a price tag lower than that seen on the R15 V3 ABS is expected. R15 V3 ABS is priced at Rs.1.39 lakhs, MT15 could be priced in the Rs 1.2 lakh range. Once launched, it will take on the Bajaj Pulsar NS200 and recently launch KTM 125 Duke.