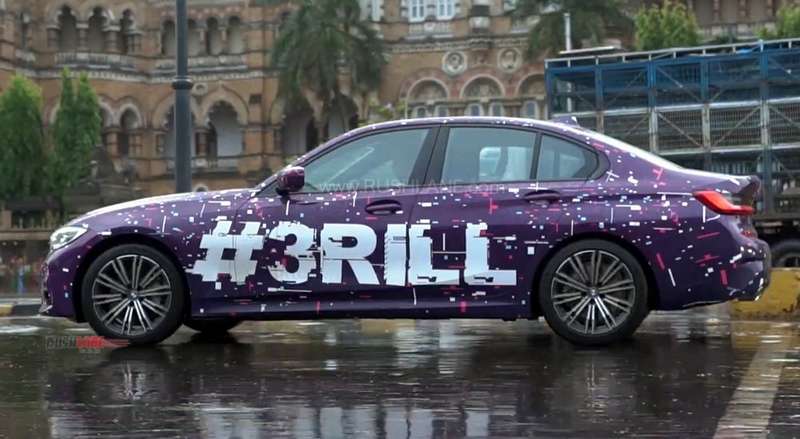 Seventh generation BMW 3 Series has been frequently spotted on road tests over the last few months and now the company has officially announced August 21 as its launch date. Unveiled at 2018 Paris Motor Show, all-new BMW 3 Series is sharper, snazzier, larger, lighter and roomier than its predecessor. It will also come with BS-VI compliant engines, giving customers the perfect opportunity to upgrade well before the new emission norms kick in from April 1, 2020.

2019 BMW 3 Series comes with an evolutionary design, even though it continues to maintain the original outline of the 3 Series cars. It has a sculpted design and smooth curves all around, allowing the car to improve its visual appeal and aerodynamics as well. In lab tests, new BMW 3 Series has registered a drag coefficient of 0.23 cd.

At the front, the blacked-out winged-grille is now larger and comes with a thick chrome strip outline. The grille is flanked by new LED headlights and dual L-shaped LED DRLs at both ends. The new LED headlights have replaced the signature ‘devil eyes’ headlamps that were a prominent feature in fifth and sixth generation BMW 3 Series. International-spec 2019 3 Series is equipped with laser lights, but it’s not certain if these will be offered in the Indian market.

Interiors have a minimalistic, yet elegant design, focused on providing clutter-free, spacious feel to users. Some of the key features include a 10.25-inch touchscreen infotainment system, seats with memory function, fully digital instrument cluster, and heads-up display. User interface has also been upgraded and it now comes integrated with BMW Assistant and AI powered BMW 7.0 Operating System.

Based on BMW’s CLAR architecture, new BMW 3 Series is 76 mm longer than its predecessor. Wheelbase is also 41 mm more. These features have helped increase legroom and boot capacity. The CLAR platform being compact, 2019 BMW 3 Series is 55 kg lighter. This makes it more agile and boosts its power to weight ratio.

7th generation BMW 3 Series is offered in two petrol and three diesel engine options internationally. All variants will come with 8-speed automatic transmission, with power being sent to the xDrive system. A 3.0-litre M340i variant producing 368 bhp is offered in international markets, but this is unlikely to be launched here. 2019 BMW 3 Series will take on rivals such as Audi A4, Jaguar XE, Mercedes-Benz C-Class and Volvo S60. Expected price is Rs 40-48 lakh.