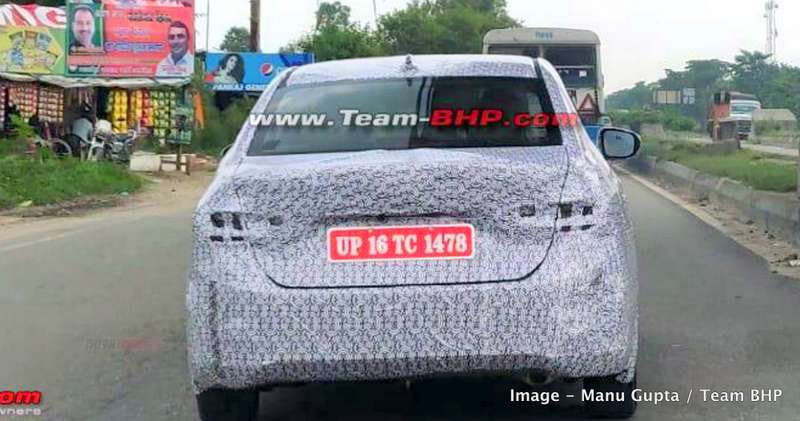 All new generation of the Honda City has started testing in India ahead of launch. Spied in India for the first time by Team BHP member Manu Gupta, the new generation Honda City will most likely debut at the 2020 Auto Expo in Feb 2020.

Last spotted in Thailand, the new Honda City test mule spotted here, is under heavy camouflage. The headlight and the tail light enclosures seem to be empty.

But thanks to spy shots of the new City from Thailand, we know that the new gen City gets wide wrap around headlamps with LED units, a new front grille sporting thick chrome surrounds and a distinctive Honda badge in the centre. Design at the rear include sportier LED tail lamps, as is seen on the current Civic; though with a new tapered design at the corners.

Honda will also be working on improved interiors for the new gen City. Being positioned on a longer wheelbase will mean extra leg room for rear passengers. Quality and finish will also be enhanced while in terms of features the 2020 Honda City could get a new touchscreen infotainment system with Apple Car Play and Android Auto.

The new Honda City which will also be positioned on an upgraded version of the existing platform will be powered by new BS VI compliant engines. These could include 1.5 liter i-VTEC petrol and 1.5 liter i-DTEC diesel units. The company also plans on mild hybrid technology for the new Honda City while the company is also considering a CVT option for the diesel powered model.

In its current format the i-VTEC petrol unit offers 118 bhp power and 145 Nm torque while the i-DTEC engine offers 99 bhp power and 200 Nm torque. The engines get mated to a 6 speed manual and automatic with paddle shifters. The full hybrid set up is not slated for launch in India due to its higher costing. What India will get is something similar to what Maruti offers in Ciaz. This will help increasing mileage by a few percentage.

Unveiling at the 2020 Auto Expo early next year is on the cards with launch in the first quarter is being planned. In India, the next gen Honda City will be produced from the company’s Greater Noida plant. The 2020 Honda City will continue to be seen as a rival to the Maruti Suzuki Ciaz and the Honda Verna.