After a prolonged delay due to lockdown, Honda has finally revealed all-new Honda City for the Indian market

As may be recalled, next-gen Honda City has already been launched in Thailand. Fifth generation Honda City comes with various upgrades including style enhancements, a range of first-in-segment features and updated engine options. With these upgrades, new Honda City is likely to be priced higher than the current model. Next-gen Honda City will be available in showrooms next month.

The dilemma for customers is whether to choose the fourth generation City or go for the newer model. BS6 compliance is no longer a decisive factor here, as both models are equipped with BS6 engines. Similar to the strategy adopted by other carmakers in the country, Honda has also reportedly decided to sell next gen Honda City along with the old model. Customers can either buy the existing model or wait a few weeks for the launch of fifth-gen City. To understand which model will offer the best value, here’s a quick comparison between fifth-gen Honda City vs. fourth-gen Honda City.

All-new 5th gen Honda City carries forward the basis silhouette of its predecessor and comes with the signature chrome front grille. Changes that have been introduced include first-in-segment full LED headlamps with integrated LED DRLs. Turn signals have a unique horizontal L-shaped design, which give the car a sporty look and feel. The shoulder line is now more prominent and runs almost the entire length of the car, connecting the headlamps with the tail lamps.

Another highlight of the side profile is the 16-inch diamond cut alloy wheels. At the rear, new Honda City comes with edgy Z-shaped wraparound 3D LED tail lamps. These design elements render a sleek profile for the car, all while maintaining the classic elegance associated with a sedan.

Both models have the same wheelbase of 2600 mm, but all-new Honda City is expected to be more spacious in comparison to its predecessor. That’s because new City is 109 mm longer and 53 mm wider than its predecessor. Furthermore, fifth-gen City is based on the company’s ‘Man Maximum, Machine Minimum’ philosophy, which ensures optimal comfort and luxury, among other things. Talking about head space, there’s unlikely to be any major difference in real-life experience even though the new City is 6 mm shorter than its predecessor.

With focus on comfort and convenience, interiors of new City have a minimalistic look and feel. The dashboard features a simple design language and comes equipped with vertically positioned AC vents. As compared to the current model that has liberal use of piano black accents, all-new City has a relatively sober interior theme. One of the key changes is the analogue meters integrated with the 7-inch full colour MID unit that displays additional information. 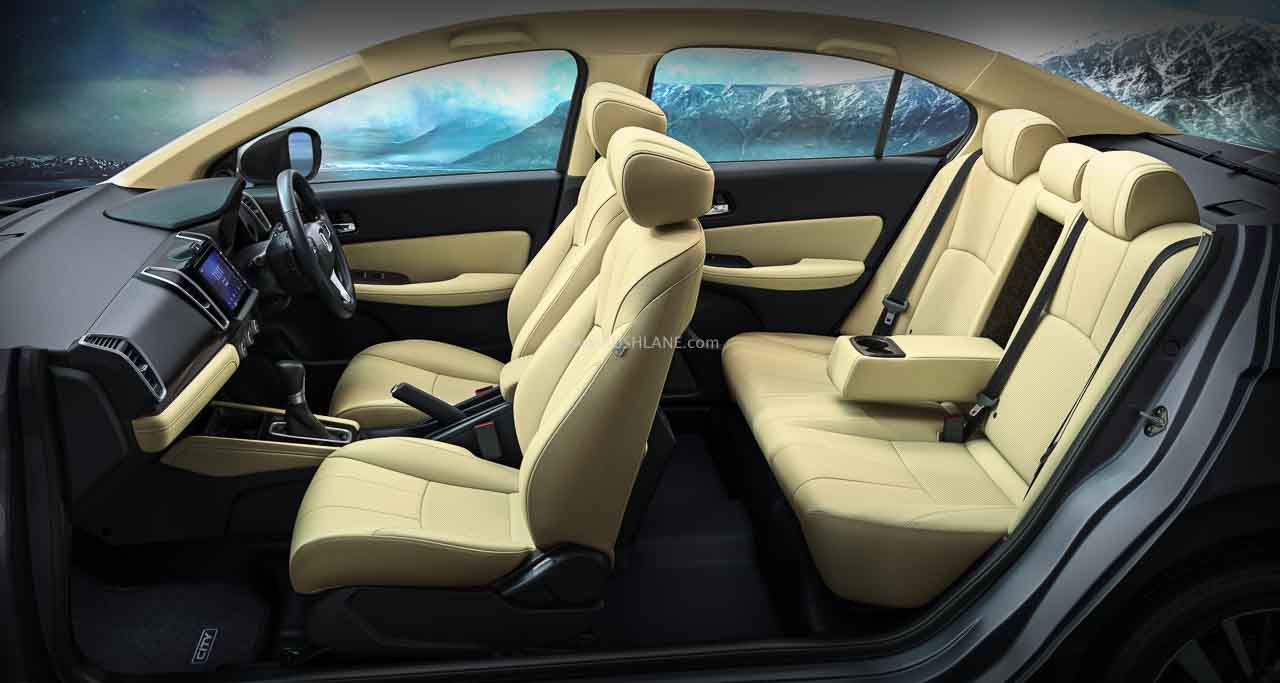 New City is equipped with first-in-segment G-meter that displays the direction and magnitude of acceleration at the time of braking or cornering. Another key change is the classic rotary dials for climate control, which replace the touch-based controls of fourth-gen City. The interiors now look a lot more premium with updated leather seats and steering wheel. Other key features include 3-point emergency locking retractor seatbelts and head restraints for all 5 seats, one-touch electric sunroof and 8-inch touchscreen infotainment system supporting Apple CarPlay and Android Auto. 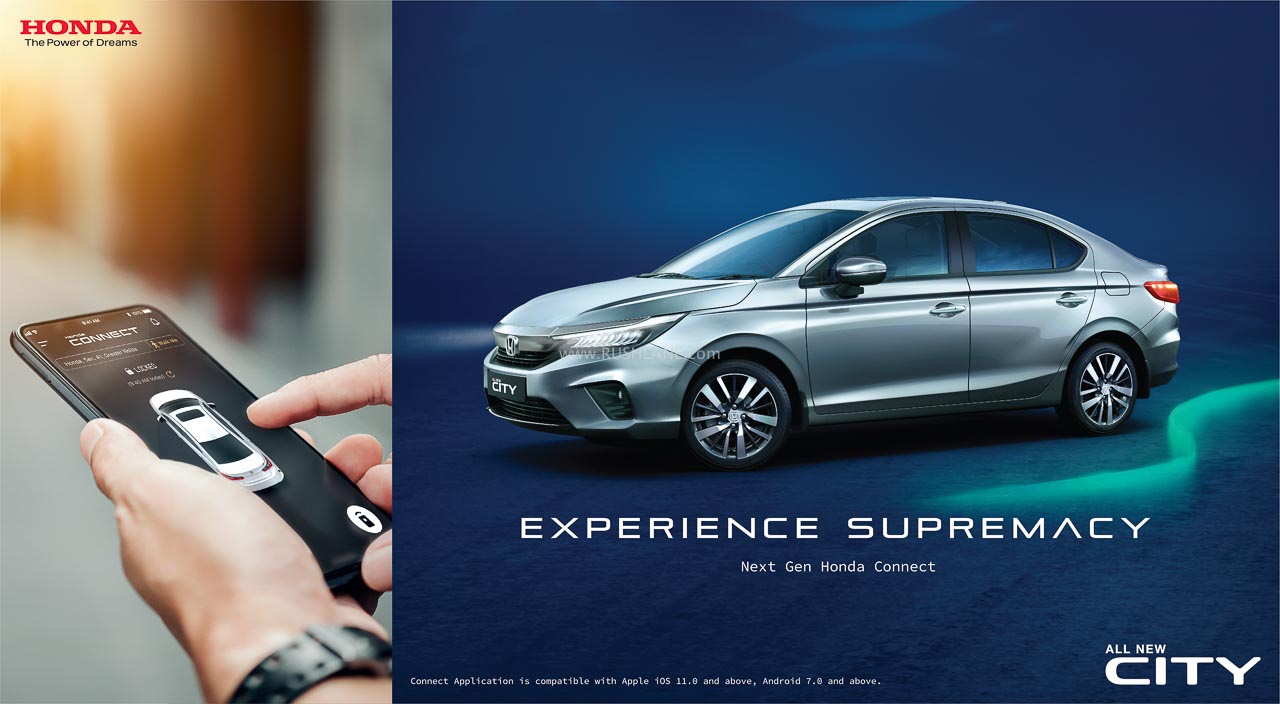 With growing preference for internet connected smart features, Honda has ensured that all-new City meets customer expectations. New City comes with 32 ingenious features available through Next Gen Honda Connect system. The company has also added Alexa remote capability, which is a first in the country. Tech upgrades were expected in new Honda City as rivals like 2020 Hyundai Verna are offering a comprehensive range of connectivity features. On new Verna, users can access 45 smart features via the Blue Link connected car technology.

Though both petrol engines have 1.5 liter capacity, they are very different. The older gen City’s BS6 unit was iVTEC with SOHC, while the new gen City’s 1.5 L is iVTEC with DOHC and VTC. Apart from updating to DOHC, adding VTC – engine internals have also been changed. This has resulted in added power, and smoother performance.

Current City has power output of 119 ps while new City delivers 121 ps. Torque output will be the same for both models at 145 Nm. New City also gets a 6-speed manual transmission, as compared to the 5-speed MT of the current model. Automatic variants of both models will have CVT units and paddle shifters. Talking about diesel options, it is available only with new City. The 1.5-litre i-DTEC engine generates 100 ps power and 200 Nm of torque. It is mated to a 6-speed manual gearbox.

Current City is priced in the range of Rs 9.91 lakh to Rs 14.31 lakh. In comparison, new Honda City is expected to be launched at a starting price of about Rs 11 lakh.

Which one to buy – New or Old?

If you prefer a no-frills approach, you can go for fourth-gen Honda City. You will benefit in terms of getting BS6 compliance at lower pricing. In case you want to experience the new features, you can probably wait for the launch of all-new Honda City. For diesel option too, you will have to choose fifth-gen City.