In a presentation during the event, Hyundai India stated that the monocoque of the new Creta (called as the Superstructure) strong. So strong that 2 African elephants can stand over the car chassis. While that makes for a great marketing material, the automaker didn’t really give us a numerical measure of the structure’s compressive strength. According to google, an average weight of African forest elephant comes out to be 2.7 tonnes. So two elephants would weigh roughly around 5.4 tonnes (5,400 kilos).

A structure which is composed of 74.3% of advanced high-strength steel resisting a compressive load of 5.4 tonnes is no doubt impressive. But not extraordinary as the 2 African elephants claim might suggest. To give you a context (or a yardstick if you will), the American Federal Motor Vehicle Standard 216 implemented by National Highway Traffic Safety Administration (NHTSA) – specifies that passenger cars weighing under 6,000 pounds (2721 kg) should withstand a force that is three times the vehicle weight applied alternatively on left and right edges (front) of the roof. 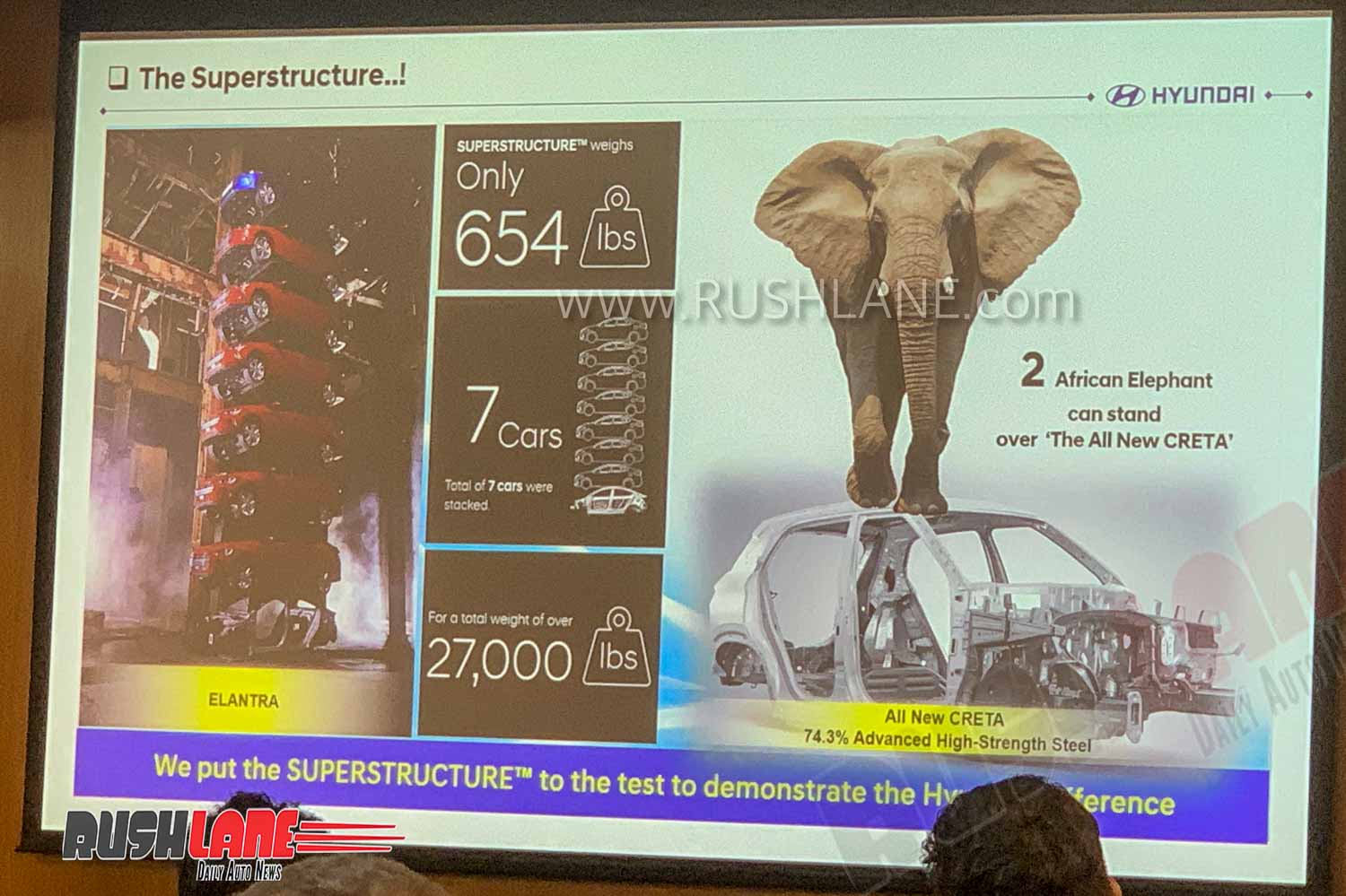 The India-spec 2020 Hyundai Creta’s kerb weight has not been revealed yet. But if we were to consider an estimated weight of 1,300 kg for our calculation purposes, then the compact crossover’s roof need to withstand at least 3,900 kg – applied alternatively on left and right leading edges of the roof. To be fair, most modern cars that are sold in the US exceed the standards by a significant margin.

Though Hyundai’s claim of the new Creta being able to withstand 2 African elephants is worded very vaguely (are they standing on the edge simulating the NHTSA test procedure? Or their weight equally distributed across the roof structure?), it is reasonable to assume that the compact crossover will meet the NHTSA standards. And that is definitely a good thing.

The roof strength directly translates into the vehicle’s ability to protect its occupants in the event of a roll-over crash. The impact force during such a mishap is massive and a roof with good compressive strength becomes the difference between life and death.

The 2020 Hyundai Creta is expected to score high in safety assessment tests, thanks to its structure as well as an array of features such as airbags, ABS, EBD, ESP, etc. It is likely to receive 5-star rating for adult occupants in Global-NCAP crash tests (if at all Hyundai sends the agency a sample car to be tested).

Hyundai India stated that the new Creta has not been crash tested by NCAP as of today. They also mentioned that the car will be tested by NCAP in the future. And when it does, the rating will be revealed. From what we saw and experienced, the built quality of new Creta looks very good. The 2020 Hyundai Creta bookings are open in India. The compact crossover is scheduled to be launched on 17th of March.