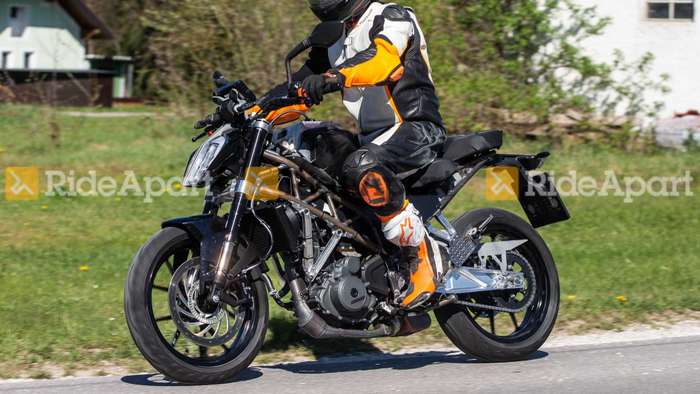 First launched in 2012, Duke 390 is one of the best selling KTM motorcycle in the world. It received a huge update in 2017, in the form of new gen Duke 390. This was bigger than the older variant, also came with more features, added weight and lesser power output.

Now, KTM has started working on yet another update of the Duke 390, whose first ever spy shots have now emerged on the internet, thanks to Ride Apart. It is to be noted here that these are very early test mules of the upcoming Duke 390. Final designs might be thoroughly different.

From the leaked images it seems that the 2020 KTM Duke 390 might be missing out on the bikini fairing, revealing a more muscular stance than before. It has grown in dimensions. The bike looks longer than the current Duke 390. 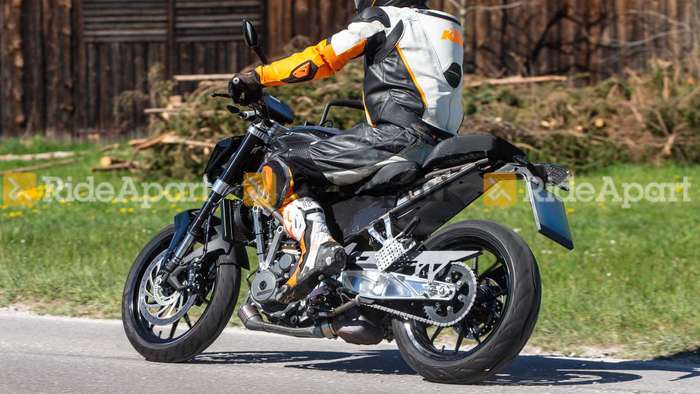 New generation KTM Duke 390 gets a similar front look with LED headlamp and inverted forks, but it is the side photos which reveal that the bike is based on a new chassis. Swingarm too is new. Rear seat looks bigger, LED tail light design has been changed. Instrument cluster is same as current D390.

If you take a close look, you will see there are minor changes made to the cylinder head and the exhaust system. This could imply that the engine has been tweaked. But is it tweaked to deliver more power and torque? That is too early to say. Changes in the exhaust system could mean it will be ready to meet BS6 norms of India.

Apart from that, there are reports which claim that the 2020 KTM Duke 390 will have reworked braking and suspension system. It is expected to make global debut at the EICMA show later this year in November along with new generation RC 390, which too has been spied on test. Ahead of that, KTM is expected to launch 390 Adventure in India, which has been spied in production ready guise in India already. In one of the spy photos from Ride Apart, the 2020 Duke 390 is probably parked next to the 390 Adventure.