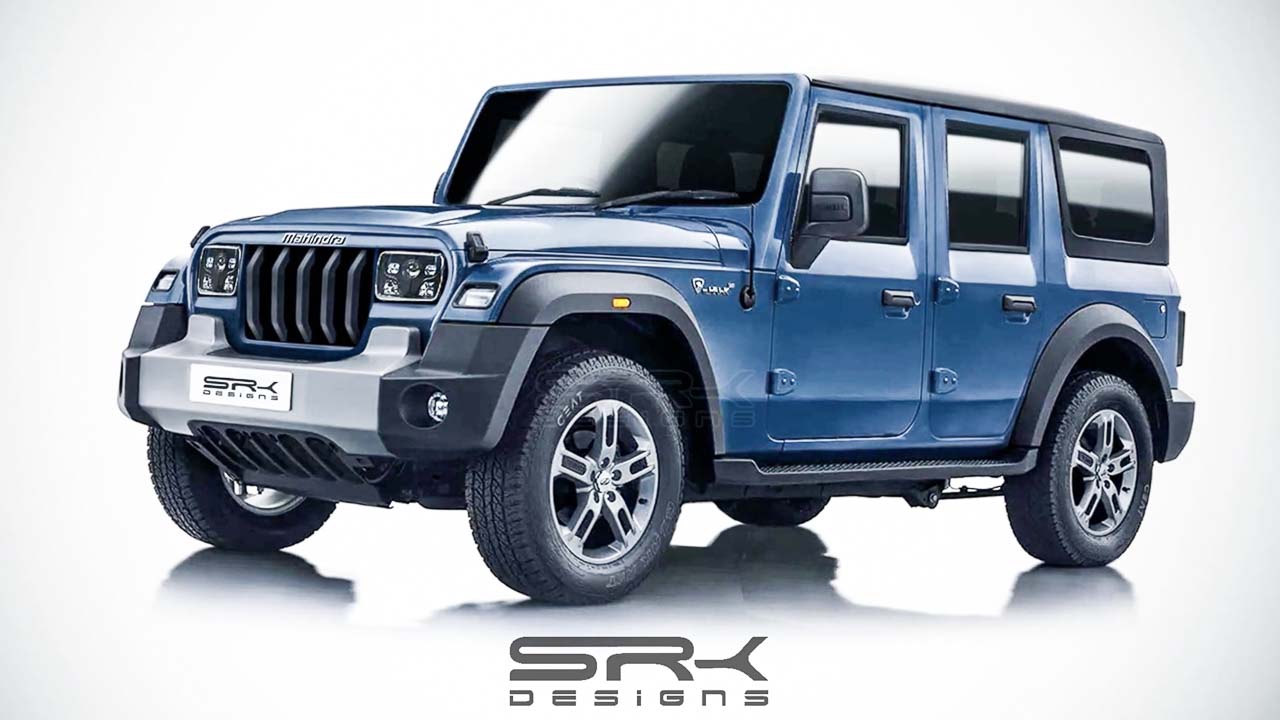 The recent unveil of the 2020 Mahindra Thar has easily been one of the most anticipated auto-event since the 2020 Auto Expo. While the SUV has garnered praise for a lot of things, many enthusiasts have agreed that its grille design could have been better. In other words, this opens considerable business opportunities for car customization workshop owners.

While it will be interesting to see all the various custom mod jobs once the car goes on sale post its launch, in the meanwhile, online graphics experts have already started modifying the 2020 Thar as per their taste and preference.

One of the first modification render has been created by SRK Designs who have reimagined the 2020 Thar as a 4-door SUV with some inspiration from the Mahindra Armada. The designer has used the standard 2020 Thar as the base and added 2 additional doors on the side, making it a complete 4/5 door SUV – depending upon how you would like to categorize it as. Like many, it seems that the designer too isn’t a big fan of 2020 Thar’s face and hence decided to alter it as per his liking.

Powering the new gen Thar 4 door / Armada 4×4 SUV will most likely be the same engine options which power the Thar. These include a 2.2 litre 4 cylinder mHawk turbo diesel motor which can dish out 130 hp & 320 Nm and a new 2 litre mStallion petrol motor which can churn out 150 hp & 320 Nm of peak torque. Both the engines will come with MT & AT options. On board the Thar 4 door, Mahindra could offer more powerful versions of the same engine.

Thanks to being longer, the 4 door Thar will be able to accommodate 7 on the inside, if all seats are front facing. It can offer seating to even more, of the last row is replaced by side facing seats. Interiors will be plush and loaded with features, just like the Thar. It will have large touchscreen system, roof mounted speakers, washable seats, etc.

As of now, Mahindra has not revealed any plans of launching a longer 4 door Thar. Depending on the success of the 2 door Thar, which will launch on 2nd Oct, Mahindra could decided to whether launch a longer version of Thar or not. For now, Mahindra is fully committed to launching the new gen Thar in India. The SUV was earlier expected to be launched at the 2020 Auto Expo, however Mahindra decided against that. Later, the Corona Virus pandemic & lockdowns gripped the nation and the launch was delayed by around 3 months.

Pricing of new Thar too will be unveiled on the same date as the launch date. Deliveries are expected to start on the same date. Expect the top-end Thar to easily breach the INR 15 lakh mark. What will be interesting to see is if Mahindra will price the Thar aggressively and end the top-end range around INR 16-17 lakhs or position the Thar as a premium lifestyle vehicle and price the top of the line trim around the INR 20 lakhs mark.