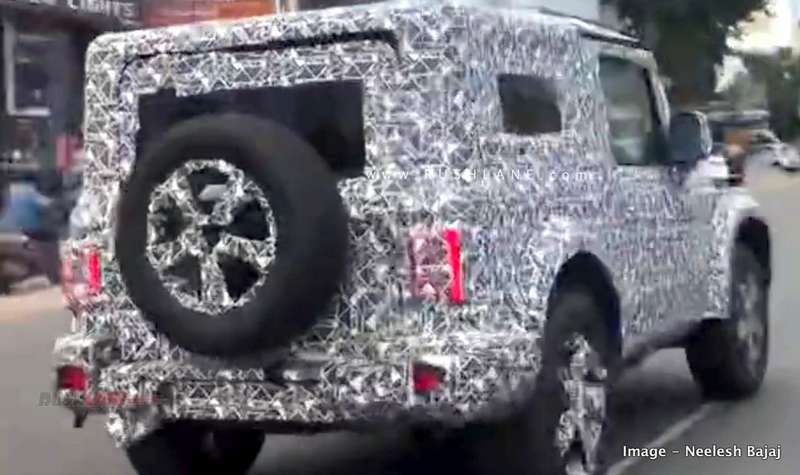 2020 Mahindra Thar will be showcased at the upcoming Auto Expo in February 2020 while sales will commence soon after. As compared to its earlier counterpart, the new Mahindra Thar will not only be larger in dimensions and get more premium fitments, but it will also get an updated engine to comply with new BS VI emission standards and will also conform to upcoming crash test norms.

Spy shots reveal that the 2020 Mahindra Thar has grown in dimensions. It was seen in a retro classic styling with its front end receiving a wider bonnet and a new 7 slat radiator grille. It also gets re-positioned circular halogen headlamps which are placed further apart, new bumpers and revised wheel arches. Watch the video below of production ready Mahindra Thar.

Ride height also appears to have increased with the other features to the rear were hidden under camouflage though a spare wheel was noted. The 2020 Mahindra Thar will be positioned on a ladder frame chassis with a stronger body so as to comply with BNVSAP crash test norms.

The interiors also get revamped so as to show off a more premium design. Its earlier spy shots revealed an all black interior colour scheme with black seating and dashboard. It sports a digital analogue instrument system, mid positioned MID, multi-function steering wheel and new AC vents in a rounded design.

A vital point of difference between the new 2020 Mahindra Thar and its outgoing counterpart would be the front facing seats at the rear as against the side facing seats seen in the earlier model. Safety also gets enhanced with driver airbags, rear parking sensors, speed alert system and ABS.

Mahindra Thar will be powered by the same engine that also powers the Scorpio and XUV500, which will be tuned differently for all 3 cars. This 2.0 liter diesel engine is expected to offer 140 PS power and 300 Nm torque on the Thar.

It will be mated to a 6 speed manual gearbox while a manually operated 4WD system will also be on offer. The engine is BS VI compliant with power and torque figures higher than that seen on its outgoing version. The 2020 Mahindra Thar will find itself competing exclusively with the Force Gurkha, which is also going to get a generation update soon.