After a long wait, all-new Mahindra Thar has finally been unveiled to the delight of auto enthusiasts

The iconic off-roader has been on road tests for more than two years now. It has generated immense interest among fans and fuelled plenty of speculations and rumours as well. Not only the all-new Thar a major upgrade over the BS4 model, it is the biggest update ever to have been given to the Thar – even though it continues to utilize the core boxy design of its predecessor. Launch will take place on 2nd October, which is also Founder’s Day of Mahindra. Price of new Mahindra Thar will be revealed on that day.

New Thar is larger than the outgoing model, which means enhanced road presence and more space for users. While the earlier model was targeted at off-road enthusiasts, 2020 Mahindra Thar is an evolved vehicle that can also be used for routine commutes across city streets and highways. New Thar comes with a range of features one would normally find in a standard SUV. It will be offered with soft top (removable top) as well as hard top. 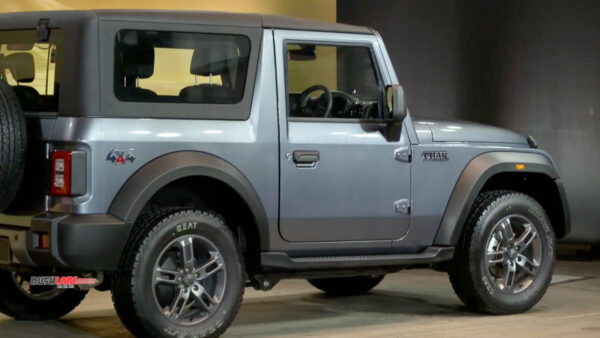 Talking about exteriors, all-new Thar has retained some of its core design characteristic such as the seven slot grille and round headlamps. Updates include LED lights, LED DRLs, prominent fenders and 5-spoke alloy wheels. At the rear, new Thar has rectangular shaped tail lights that come with ‘Thar’ badging. Reflectors can also be seen on rear fenders. Sturdy looking chrome skid plate is another feature that enhances the SUVs bold looks. 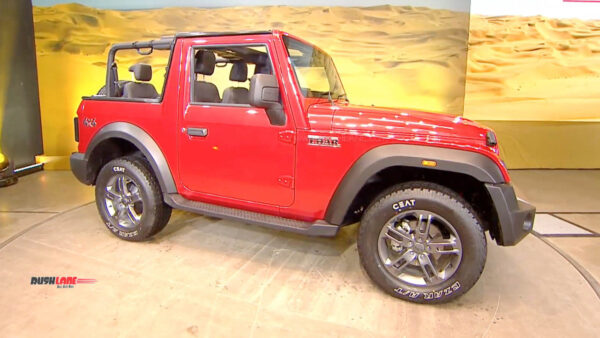 Thar’s transformation is more evident on the inside where it gets a wide range of creature comforts. The SUV includes features such as multifunction steering wheel, touchscreen infotainment system, instrument console with MID, automatic climate control, bucket seats, etc.

Another key change is the addition of forward facing rear seats with adjustable headrests. This allows the new Thar to reduce the gap in comfort and convenience, as offered by standard SUVs. As may be recalled, the earlier model had side facing seats. 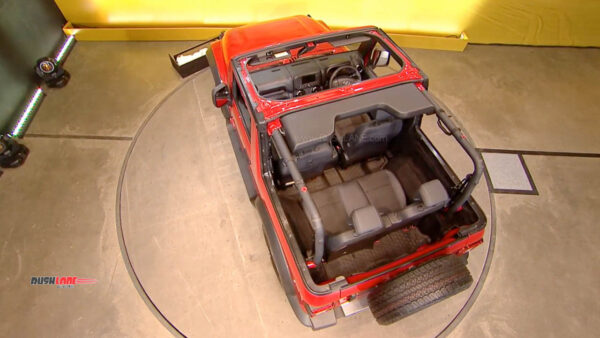 The only issue that rear passengers may face is that ingress and egress is via the foldable front passenger seat. New Thar hasn’t diluted any of its off-road capabilities, so passengers will still be missing the rear doors of a standard SUV. This was unavoidable, as adding rear doors to new Thar would have been a major disappointment for off-road enthusiasts.

Users can expect better performance with the new Thar, as it has been equipped with Mahindra’s upgraded 2.2 litre turbo diesel mHawk engine that delivers higher power output of 130 hp and 320 Nm. For records, the BS4 Thar was powered by a 2.5-litre diesel unit that made 105 bhp / 247 Nm. It came mated to a 5-speed manual transmission. 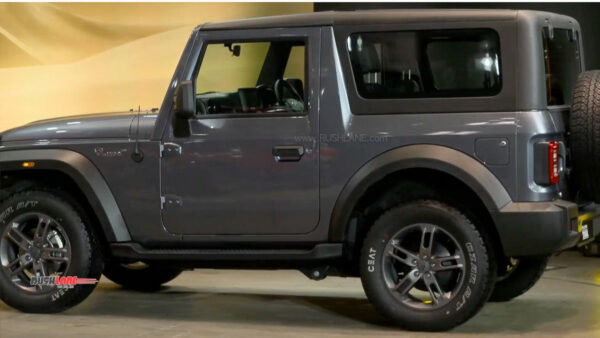 New Thar is also available in petrol option, powered by a new 2.0 litre petrol mStallion engine that churns out 150 hp / 320 Nm. The addition of petrol variant clearly indicates Mahindra’s intentions to market new Thar as a premium lifestyle product. Both engines get manual as well as a torque converter automatic transmission from Aisin. Top-spec variants will be available in 4×4 configuration. 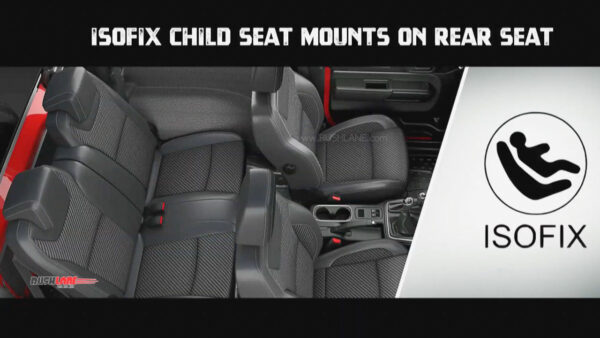 Another major upgrade is the new ladder frame chassis, which meets the new crash test norms. The earlier model came with a chassis derived from Scorpio’s platform. The new ladder frame chassis will enhance the overall experience for off-road users, as things like approach and departure angles and torsional rigidity have been improved. For use on city streets and highways, the new chassis will ensure smooth, vibration-free rides. Suspension and braking systems have also undergone a major revamp. 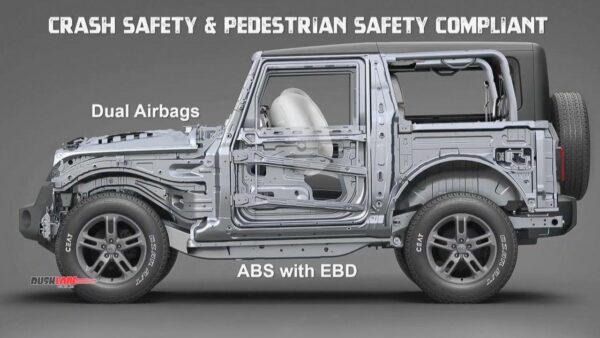 New Thar will be available in both hard-top and soft-top configurations. Safety has also been updated on the new Thar, which is in line with the new safety norms mandated by the government. Some of the key features include front airbags, reverse parking sensor, ABS, traction control, hill descent control, front passenger seatbelt reminder and speed alert system. 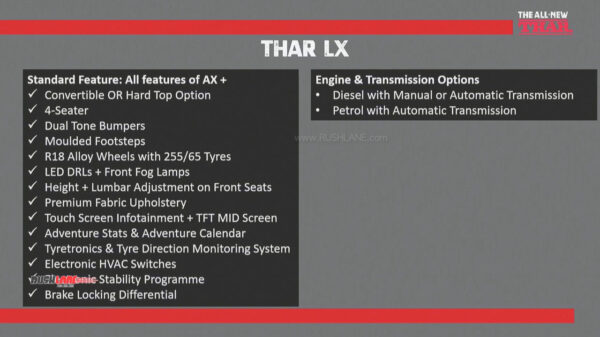 As of now, Mahindra Thar does not have any direct rivals. It has largely enjoyed a monopolistic position ever since it was launched in the country in 2010. However, market dynamics could change in the future when Force Motors launches its Gurkha BS6 model. As may be recalled, Gurkha BS6 was showcased earlier this year at 2020 Auto Expo. It’s obvious that all planned BS6 launches were delayed due to Covid-19 pandemic. 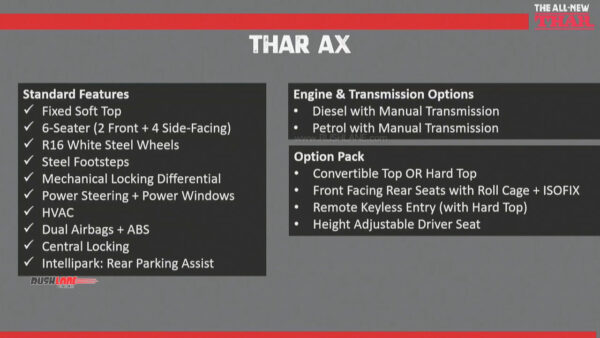 Another potential rival could be Maruti Suzuki Jimny provided that it is launched in its original three-door configuration. Jimny launch in India is not even certain and on top of that there are speculations that it may be offered in the country in a 5-door configuration. In that case, Mahindra Thar should not have anything major to worry about.

Overall, next-gen Thar appears to be a lot more mature and refined in comparison to its predecessor. While performance and driving dynamics have been enhanced for off-roading purposes, new Thar has also emerged as an attractive option for everyday use. 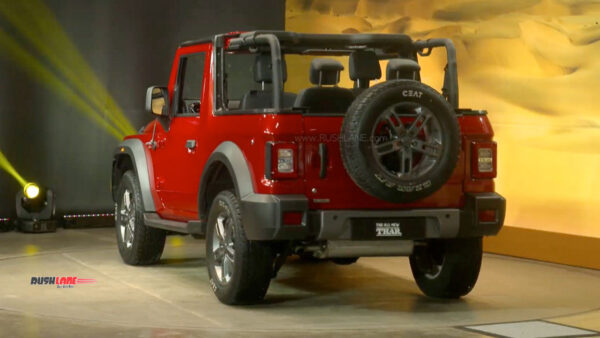 Earlier, Thar was largely utilized as a secondary vehicle. But with the new features and upgrades, next-gen Thar can also fulfil the needs of single garage owners. New Thar can also witness demand from the Indian Army and/or police or administrative departments. Launch of new Mahindra Thar is on 2nd October 2020, which is when prices will also be revealed.