Expected to make its debut at the 2020 Auto Expo early next year, the next gen 2020 Mahindra Thar is being actively tested. The latest spy shots of 2020 Thar SUV detail the side view of this two door variant of the rugged off-roader.

The new Thar gets a boxy stance with a hard top. Its exteriors are noted while testing with a new seven-slat grille and vertical taillights, rounded headlamps which are positioned wider apart and fog lamps. It also sports flared wheel arches enhancing its sporty appeal while ground clearance has been raised.

When comparing the side view of the new gen 2020 Mahindra Thar with the new gen Jeep Wrangler two door variant, the two SUVs have an uncanny resemblance. Ofcourse, they cater to a different segment of buyers. One is expected to be priced at Rs 10 lakhs, while the other could be priced in the Rs 50-60 lakhs range.

The interiors of upcoming Mahindra Thar get features such as a new dashboard design in an all black colour scheme. This makes the new Mahindra Thar even sportier as compared to the black and beige color scheme seen in its current counterpart.

It also gets power windows, a large driver’s MID system taking the place of the three pod instrument console and a new infotainment system which has been mounted higher on the dashboard. The seats are also finished in the same black colour scheme with fabric upholstery and contrasting stitching in white while it also receives new air conditioning controls and rounded AC vents.

Speaking about engine options, the base variants could be powered by the same engine as seen on current Thar, but with BS6 update. This engine is a 2.5 liter diesel mill generating 105 hp and 247 Nm torque. It will be offered with 4×4, airbags, ABS, etc. Top of the line variants will be more expensive, thanks to the addition of an all new engine. 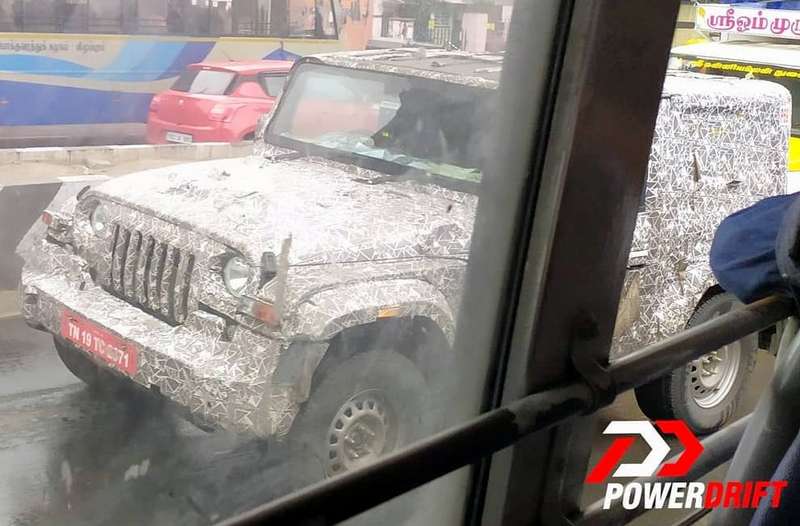 This will be in the form of a 2.0 liter BS6 diesel engine that offers about 140 PS power and 300 Nm torque. Though the new gen Thar continues to sport a four wheel drive layout, it does get a new 6 speed manual transmission.

Safety features also get enhanced with dual airbags, ABS, EBD, rear parking sensors and seatbelt reminder for front seats. The new Thar, which also gets improved approach and departure angles as a part of its update, could see an upward revision of price.