A preferred choice for off-roading enthusiasts, the iconic Mahindra Thar made its global debut on August 15. Coinciding with India’s 74th Independence Day, new Thar’s debut couldn’t have come at a better time. That’s because the SUV itself is all about the freedom it provides to users to go beyond the ordinary and explore new lands and terrains.

To build upon its iconic stature and fan following, Mahindra has ensured that all-new Thar is no less than a quantum leap over its predecessor. Next-gen Thar comes with significant enhancements across areas such as comfort, technology and safety. These upgrades have been achieved without compromising on the legendary off-road capabilities of Thar.

Set to be launched on 2nd October 2020, the first unit of new Thar will be auctioned. Bidding started earlier today. As of now, the highest bidding amount recorded in the online auction of Mahindra Thar is Rs 79.25 lakhs. With the auction going to be LIVE till 29th Sep, the bid amount is expected to go even higher and cross the 1 Crore mark. The highest bidder will become the first owner of new Mahindra Thar. 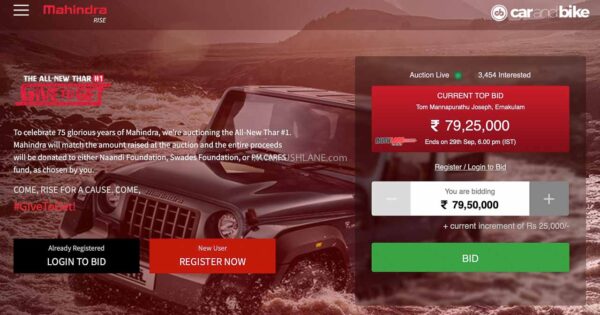 Mahindra has announced that whatever is the winning bid, they will match that amount and donate the total amount. The donation will be made either to PM Cares Fund, Naandi Foundation or Swades Foundation – as chosen by the winner of the auction. You can follow the live auction here – https://auction.carandbike.com/home/auction (CarAndBike.com website is owned by Mahindra Group).

The second generation Mahindra Thar has been detailed ahead of launch date set for 2nd October 2020; which also marks the company’s Founder’s Day. Compared to its earlier counterpart, the 2020 Thar is seen with some cosmetic updates, added features and options of petrol and diesel engines while price has not yet been revealed.

The 6 speed manual transmission is designed in-house and sets world standards. It ensures better fuel efficiency with dual overdrive 5th and 6th speed rations with the 6R320, as also seen on the Mahindra Scorpio. This gets integrated with cable shift arrangement offering effortless, vibration free and precise shifting along with reverse lift up feature.

Where the 6 speed torque converter automatic transmission is concerned, this is sourced from AISIN, an internationally acclaimed engineering firm. The engine is mounted longitudinally and along with this transmission results in smooth off roading performance with crawl function.

Both these petrol and diesel engines which power the 2020 Mahindra Thar will allow the off-roader to prove itself in terms of power and performance, not only on challenging terrain within India but also where such off-road conditions in global markets are concerned.