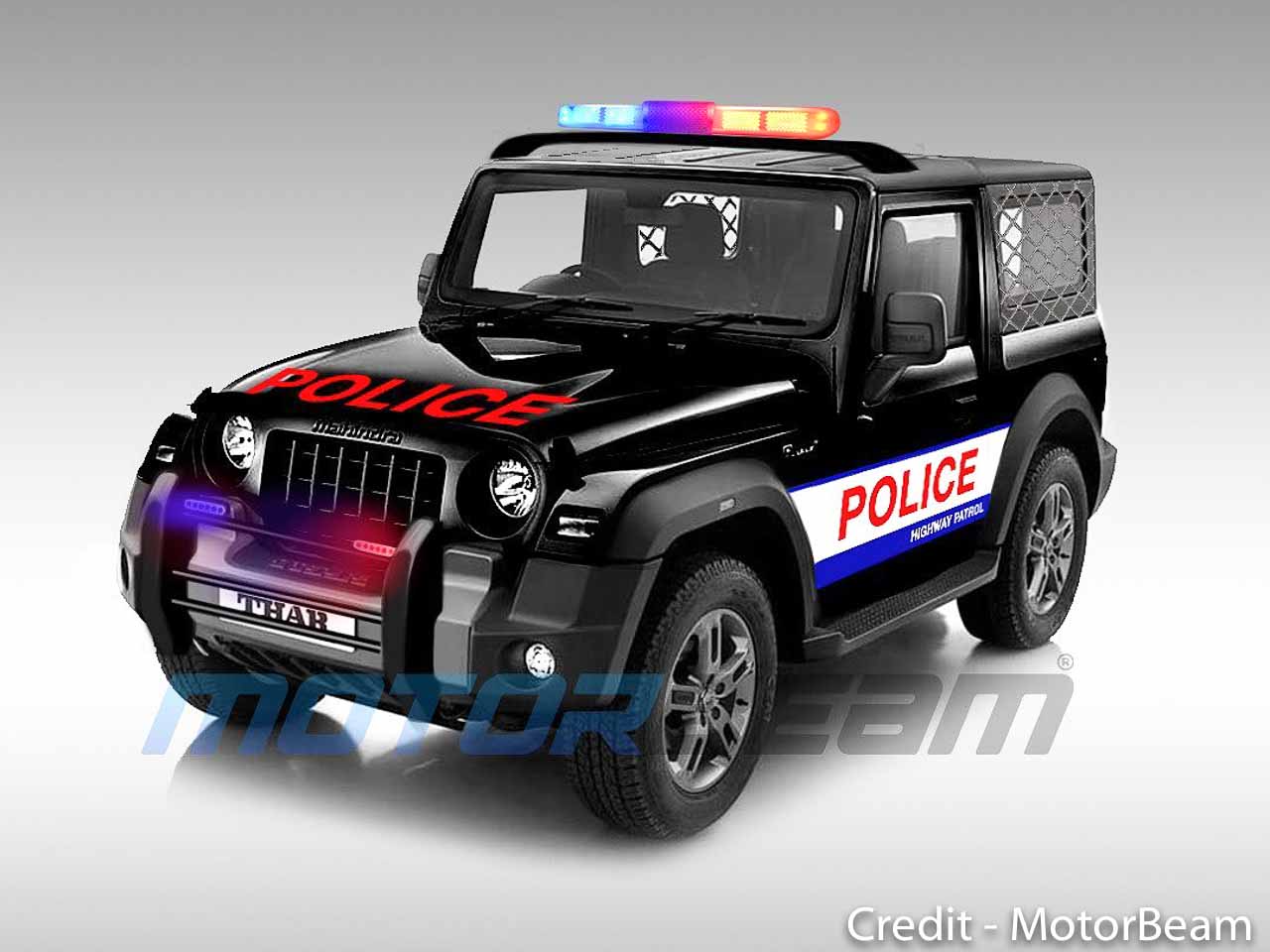 The highly anticipated SUV was spied testing on numerous occasions for over a year and a half. In spite of participating at the 2020 Auto Expo, Mahindra didn’t even reveal it there, as was expected by many. When it was finally revealed on the 15th of August people accepted it with both arms open.

However, it could not shy away from the resemblance of the Jeep Wrangler. On the whole, the new Thar looks rugged, a bit more sophisticated and proportionate and therefore it has unanimously received a thumbs-up on its design.

So much so that there are multiple new digital renders of the new Thar being imagined already – even before the actual launch of the car. One such render has been shared by Motorbeam, which shows the new Thar as a Police car. 2020 Mahindra Thar Police SUV is finished in all black paint with black alloys. It gets signal lights on the top as well as on the front. There is Police Highway Patrol badging on the side.

Compared to Thar, it is the Scorpio and Bolero which are more preferred by the Police in our country. Many Police departments have these as their official cars. Probably due to the rugged nature and all terrain capabilities of these SUVs, that they are preferred by the cops. Thar on the other hand, is only a two door variant, and is smaller in size comparatively – which could be the reason it is not the preferred choice of cops. But with the new Thar getting bigger and more powerful, there is a chance that cops might just welcome the same in their fleet.

Though the overall design of new Thar has received praises, there is one glitch which seemed to have left the Thar fans bewildered- the front grille. Many feel that the grille is completely out of sync from the rest of the vehicle and that it is more of an afterthought, something which was incorporated at the last stage.

It is speculated that Mahindra went for such a grille to possibly avoid any further controversies or legal battle with Fiat Chrysler Automobile(FCA) since it reminds so much of the Wrangler. It is to be noted that, FCA had earlier won a legal case in the USA which forbade the sale of Mahindra Roxor(an ATV version of Thar) since its striking resemblance to its front grille with that of Wrangler’s.

For consumers visibly unsatisfied with the stock grille of the new Thar, the after-market industry has introduced some grille options which will hopefully satisfy their interests. These aftermarket grilles have already started reaching markets, even before the Thar is officially launched. However, the non-OEM grille does bring back its resemblance to the Wrangler.

Details of the grille options

The new grilles come with 5/7 slats options. They are a single unit that comprises the headlight housing, unlike the stock grille which has a separate unit for the headlights. The materials used for these grilles seem to be fibre-plastic. Colour options stay the same as that offered in the upcoming SUV- Napoli Black, Red Rage, Rocky Beige. Aquamarine, Mystic Copper and Galaxy Grey. These options are said to be made available to the buyers at the dealership levels at time of purchase.

The new generation Mahindra Thar will be officially launched on October 2. It will be offered in two engine options– a 132 bhp producing 2.2-litre mHawk turbo diesel unit and a new 150 bhp producing 2.0-litre mStallion turbo petrol unit. Both engines come with the option of getting paired with either a 6-speed manual or a 6-speed automatic gearbox. Prices are to be revealed on the day of launch, however, it is expected to range between Rs 10- 15 lakh(ex-showroom).