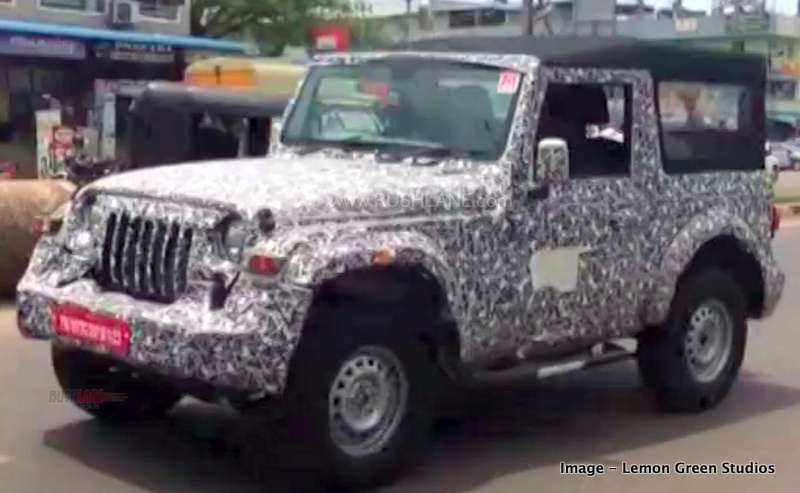 Previous set of spyshots of the 2020 Mahindra Thar revealed that the off-roader adopts a conventional seating configuration with forwarding facing rear seats. Some spyshots also suggested that the next gen SUV could be equipped with hardtop. The latest video of the prototype indicates that there would be more than one variant of the Thar in store.

The video shows a camouflaged prototype with tarpaulin roof and longitudinal rear benches like the existing model. This one has a utilitarian appeal to it and appears to be the entry level variant. It looks like Mahindra will offer more features and creature comforts on fully loaded variant including proper seating for 5 persons and a hard roof in a bid to appeal to wider audience.

Either way, there is no doubt that the new Mahindra Thar looks much wider than its predecessor. Likely to be underpinned by a new ladder frame chassis with improved crash performance, the new Thar is expected to take on the unpaved terrain even better than before. We expect the off-roader’s ground clearance, approach and departure angles to be improved. Video credit – Lemon Green Studios.

Previous images revealed that the upright dashboard is completely new and has better equipment. It would be nice if Mahindra offers a touchscreen infotainment system on the fully loaded variant. The SUV features a new instrument console with MID and a steering wheel borrowed from the TUV300. Equipment list will include mandatory dual airbags, ABS, speed alert system, front passenger seat belt reminder, etc.

The entry-level variants are expected to get the BS-VI version of the existing 2.5-liter diesel engine which produces 105 hp. The range-topping variant is reported to receive the company’s brand new 2.0-liter diesel motor which is estimated to deliver around 140 hp.

Transmission is likely to be a 5-speed manual unit. The hard core off-road enthusiasts can opt for a full fledged 4×4 system with lockable differentials and low transfer case. The new Mahindra Thar is expected to be ready early next year.