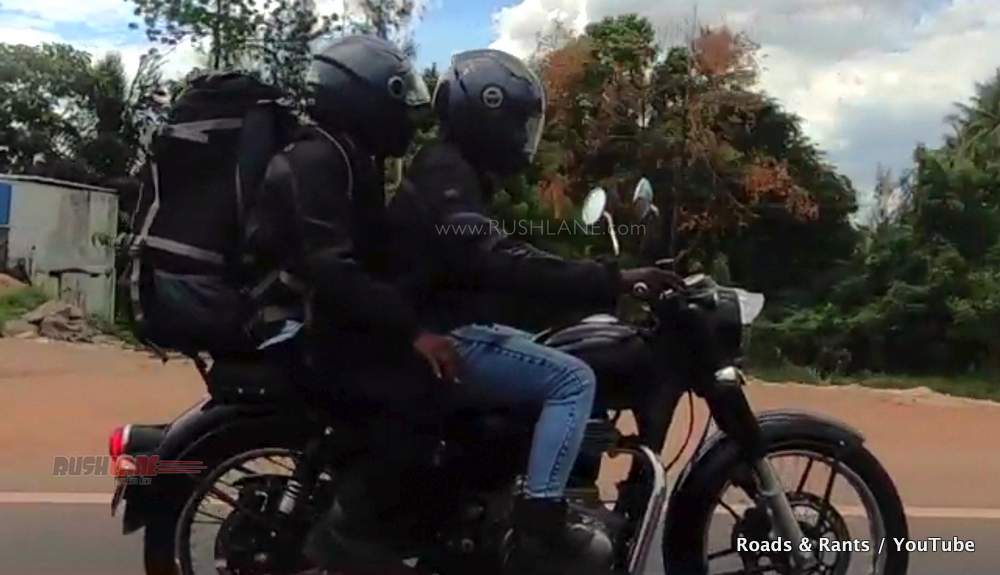 Latest spy shots of next-gen Royal Enfield Classic 350, thanks to YouTube channel Roads & Rants, reveal that the motorcycle comes with a range of cosmetic, design and mechanical updates. While it retains most of its rustic charm, next-gen Classic 350 gets certain features that add a modern twist.

For example, the large tail light and number housing has been replaced with a sleeker unit that comes with chrome bezel. It is possible that LED tail light may have been used. Features that have been left untouched include the classic round headlamp and retro-styled fenders.

New Classic 350 takes some inspiration from Interceptor 650, as can be seen in its silver bar-ends and chrome mirrors. Rear seat has been redesigned and it now comes with rounded edges, which is aesthetically and ergonomically superior. Grab rails have also been raised to improve ergonomics.

As you can seen in the video above, there are two test mules that have been spied by Roads & Rants. One has only a rider on board, the other mule as a rider as well as a pillion on board. Both motorcycles are also seen with luggage, in one the rider is carrying a huge backpack, while in the other it is the pillion is carrying a similar bag. Both bikes are probably being tested for performance under full load, rider / pillion comfort with backpack, etc.

From a design perspective, next-gen Classic 350 gets a new dual-cradle frame that replaces the single-down tube unit on the existing model. As revealed in spy shots, this dual-cradle frame is also being used in next-gen Thunderbird. Since the engine is mounted differently with this new frame, it is possible that Royal Enfield might use rubber support to reduce engine vibration.

Another key change can be seen in front and rear disc brakes that have been moved to the right side. With this, the chain gets moved to the left. Placement of chain on the left could also have been done to align it with the updated engine and drivetrain.

While the revised engine looks the same as earlier from the outside, it could possibly be a BS-VI compliant fuel-injected unit. It is expected that 350 cc and 500 cc configurations will be maintained, but we cannot deny the possibility of some minor changes in power and torque output of the updated engine. Related parts such as transmission casing and exhaust system have been updated. It is also being speculated that next-gen Classic 350 will discontinue kick-start system.

With the new features and upgrades, next-gen Classic 350 could be priced a bit higher than the current model. Talking about the current model, it recently received rear disc brakes and dual-channel ABS. New colour options were also added in the last couple of years.