It was last year, when the news was first reported that Royal Enfield is going to upgrade their entire range of existing motorcycles to a new platform and a new engine. In the next 3 years, the company plans to launch up to 12 new motorcycles – all based on new generation. So today’s launch of Scrambler / Trials, is probably not included in this plan.

Now, a different looking Royal Enfield Classic 350 or 500 has been spied by folks at PowerDrift. At first glance, it looks similar to current Classic series from RE. But thanks to the red no plate and a closer inspection, confirms that this in fact is the new generation of Royal Enfield Classic motorcycle. 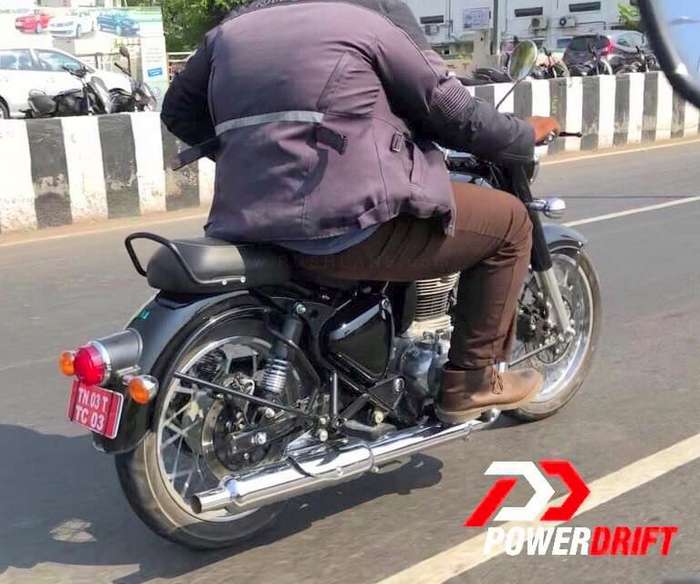 Changes include a new exhaust design, which sees the heat shield overlap bit with a rounded edge sit a bit shorter as compared to the angular overlap that sits in line with the rear suspension seen on current models. The rear light set up though similar to the current setup, except that the LED taillight is now encased in a round barrel like structure and sits in a chrome bezel.

Rear nitrox suspension has paved the way for a more regular and dated looking rear shock absorber. This could be a temporary arrangement, as RE might be testing different options with the new gen chassis. A swingarm redesign makes for a slightly wider structure positioned in a more parallel to the exhaust angle rather than slanting.

Another noticeable change is that the rear disc is positioned on the right of the wheel, which means the chain setup is now on the left. This is opposite of the current setup. Non-visibility of kick-start (assumed to not be there) points to a redesigned UCE engine, which is probably upgraded to BS6 emission norms upgrade. Seats too wear a new look.

All in all, the new Royal Enfield Classic 350 and 500 will not only get new parts and a new engine, but will also get a new chassis. Sources reveal that this will be a more refined version of RE ever, and vibrations will be as good as not existent. Mileage and top speed too has been reportedly increased. This is good news for fans, who have been waiting for years, for a refined and vibration free Royal Enfield 350, which is also the best-selling RE; registering about 40k units in monthly sales.

And with Jawa motorcycles around the corner, timing could have not been any better for RE to launch updated motorcycles. Launch is expected to take place in 2020, before the BS6 norms are implemented on 1st April 2020.