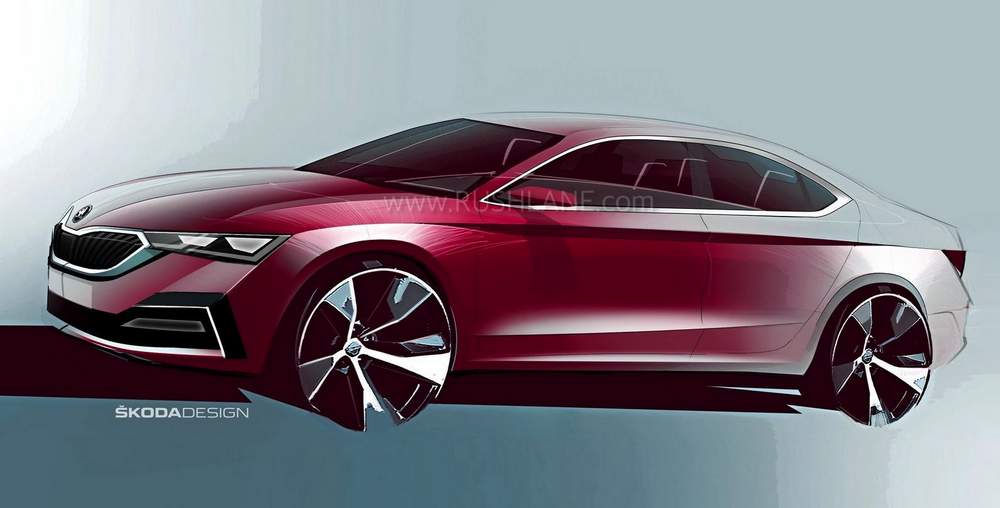 Ahead of official debut next month, 2020 Skoda Octavia new generation has been officially teased. These are the first teaser photos of the new Octavia sedan, which will also be launched in India.

This fourth generation Octavia, which is based on the same platform as the Audi A4, will see some design changes both where exteriors and interiors are concerned. It will sport a new front grille, revised headlamp cluster and LED DRLs in a new design.

2020 Octavia will also get a new bonnet design and deep crease lines. Changes to the rear will include L shaped LED tail lamps and a distinctive Skoda logo on its boot lid. As compared to the current generation model, the new Skoda will also see increased dimensions thus creating more interior space.

Leaked images of the interiors reveal a completely new design; especially where its two spoke steering wheel is concerned. This steering wheel borrows inspiration from the Skoda Vision C Concept which emerged as the new Skoda Kamiq.

The instrument panel gains a new shape along with a centrally positioned touchscreen infotainment system. The interiors will also get a new dashboard and central console allowing for a minimalistic look along with centrally positioned air vents. In terms of safety as well, the new Octavia will receive a host of new safety features so as to meet with the stricter standards.

Engine specifications have also been reportedly leaked, with the international spec model getting mild hybrid and plug in hybrid options. Skoda Octavia in India are likely to get a 1.5 liter TSI petrol engine and 2.0 liter TDI EVO diesel engine mated to 6 speed manual or 7 speed DSG. Both engines will comply with new BS VI emission norms.

Launch in India is pegged for sometime later in 2020. The many improvements will see price hiked from the current generation model; which is priced from Rs.15.49-27 lakhs. It will compete with the Honda Civic, Toyota Corolla Altis and Hyundai Elantra.

The Skoda Octavia is currently the company’s highest selling model in the country and second in its segment after the Toyota Corolla Altis. Skoda sells four cars in India -Rapid, Octavia, Superb and Kodiaq.