Skoda’s entry level sedan, which sits below the Octavia in the global line-up, Rapid is soon going to get a new generation update. First undisguised photos of the 2020 Skoda Rapid have now been leaked online, credit to Auto Home China.

Yes, India will get the new generation Rapid, but it will be different than the on seen in the leaked photos here. China spec Skoda Rapid sedan is based on the Volkswagen MQB platform, while the India-spec Rapid will be based on cost efficient MQB-A0-IN platform. This is the same platform which will also be the basis of new gen Polo, Vento and the Ameo.

Speaking about the new Rapid sedan, it gets a completely new exterior and interiors. The car now looks more like the new gen Octavia, which is also due for debut later this year. 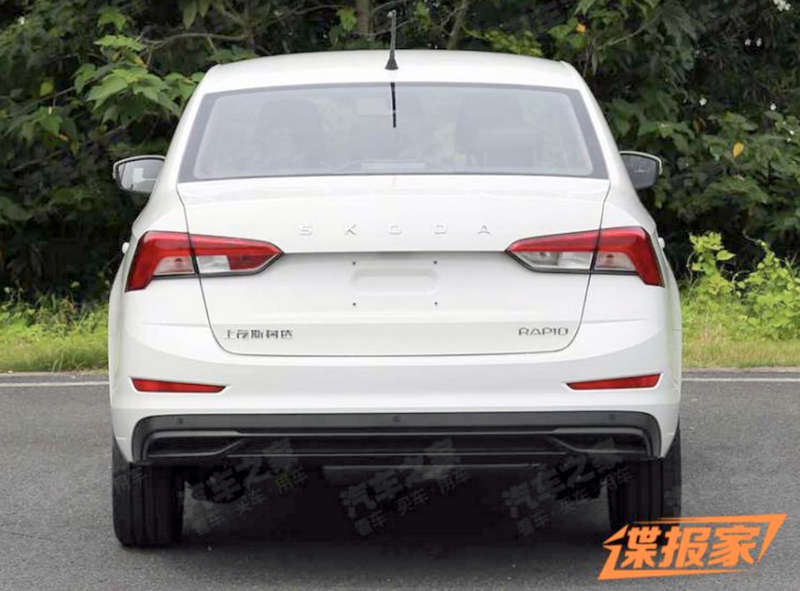 The headlight cluster gets new design, while the grille is more angular, and lot smaller. There is a Skoda logo on the hood, just above the center of the grille. The lower bumper is quite plain. Headlight unit features all LED unit with LED DRLs.

On the side, alloys and tyre size seem similar to that of the current Rapid. Top variant gets dual tone machine cut alloys with lower profile tyres. Rear window is larger, which translates into more space at the rear.

2020 Skoda Rapid is not only longer, but also wider than current Rapid. This will help the Rapid take on segment rivals like the Honda City and Maruti Ciaz, which offer best in class space and comfort. It also gets electric sunroof. At the rear, the tail light setup, reminds of the new Octavia. In the center, on the boot lid you get SKODA badge.

On the inside, one can expect completely revised design. From dashboard to touchscreen infotainment system to seats – everything will be new. Engine options on offer will be Skoda’s new generation of powerful yet efficient engines. Both petrol as well as diesel motors will be on offer.

Once launched, Rapid’s replacement will compete with the likes of Maruti Suzuki Ciaz, Hyundai Verna and the next-gen Honda City. It will also face competition from its sister brand – Volkswagen’s sedan which will also be based on the same platform, and most likely produced in the same plant and assembly line.