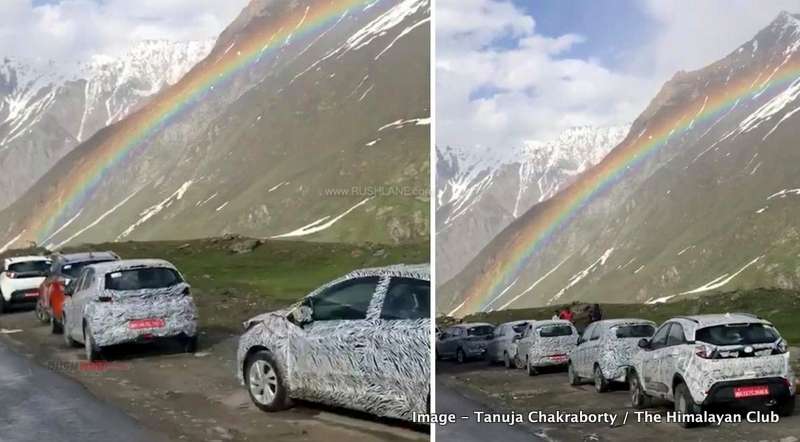 A few months ago, we had shared the first spy shots of facelifted Tiago, Tigor, Nexon. These were spotted in Chandigarh at that time, along with new Altroz. All were getting offloaded from a truck. The reason they were in Chandigarh, is they were going for high-altitude and cold weather testing, to Leh Ladakh.

The same fleet of cars has now been spotted, in Drass – which is one of the coldest inhabited place on Earth. Temperatures in winter dip below -50 degrees. But this time of the year, Drass has a pleasant climate. And it is this climate, and the magnificent rainbow, which was being spotted by the engineers and drivers of the Tata test cars.

It was so scenic that the entire fleet of about 10 cars decided to stop on the side of the road, and enjoy the view. And they were not the only ones. Tanuja Chakraborty of The Himalayan Club, was shooting a video of the rainbow, and unknowingly, the camera also captured the entire fleet of Tata BS6 cars. Watch the video below, featuring the 2020 Tata cars – Tiago, Tigor, Nexon and Altroz, with a rainbow in the background.

On the exterior, Tiago, Nexon and Tigor will mostly get a more aggressive grille, a revamped bumper and an updated headlamp setup. Top-end variants are also expected to come along with LED DRLs. New alloys are expected and so is a revised back, with an updated bumper and smoked tail-lamps. Overall, Tata Motor’s IMPACT 2.0 design will be the guiding light for the design of the upcoming Tiago.

As far as interiors are concerned, Tata will mostly bring in new upholstery options to make the cars look new. In the past, Tata had introduced a 7-inch touchscreen infotainment in the Tiago and the same will feature in new BS6 variants as well. All cars will also get driver side’s airbag, ABS, rear parking sensor and speed warning systems as standard, all of it to ensure that the cars meet the requirements for the upcoming safety norms.

On the power train front, the Tiago and Tigor will continue to get diesel (70hp/1.05litre) and petrol (85hp/1.2 litre) options till Q1 2020, however, once the BS-VI emission norms start to kick-in, the diesel motor will most likely get discontinued. However, Tata will upgrade the current 3-cylinder petrol motor in time to ensure that it complies by the BS-VI emission norms.

Nexon facelift will also feature minor updates on the outside and the inside. The biggest update will be in the form of BS6 petrol and BS6 diesel engine. Expect launch to take place later this year or early next year. Ahead of that, Tata will launch the new Altroz in the coming weeks. 2020 Altroz is a Maruti Baleno rival, which has been officially teased by the company.