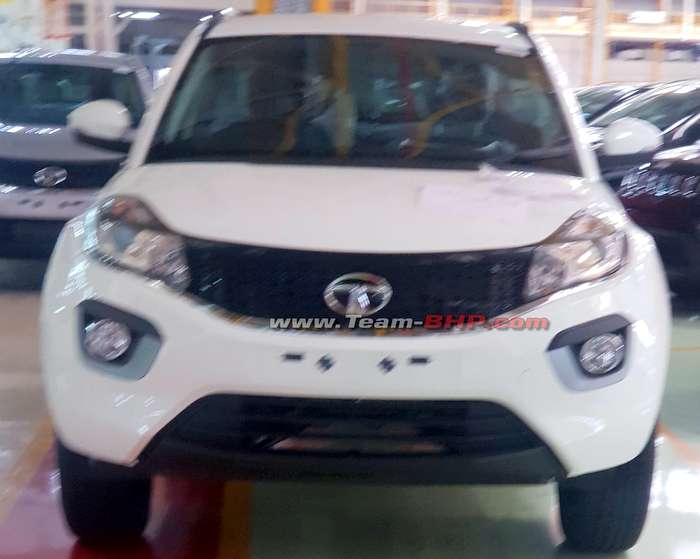 It is no secret that Tata Motors is working on establishing a comprehensive range of electric vehicles in a bid to stay relevant in the future. It is safe to say that every model that is to be launched by the automaker would be having an EV option. That’s not all. The Indian auto giant is also working in electrifying its current star performers as well.

After the Tiago and Tigor EVs, Tata Motors is reportedly working on an electric version of its brisk selling model, the Nexon compact crossover. According to Team-bhp’s source, as many as three Tata Nexon EV prototypes were built as a part of production test run.

While the forum’s source managed to click a picture of what is claimed to be one of the three Nexon electric vehicles produced, there is no additional information about it whatsoever. The Tata Nexon electric is a top-secret project as of now, and it is being reported that only employees in the need-to-know loop are allowed access to the prototypes.

The spy shot bears no obvious visual clue as to what is lurking under this white Nexon’s bonnet. It appears that the space behind the secondary air-dam is vacant, suggesting there is no radiator (indicates a pure electric powertrain) but due to the blurry nature of the photograph we can’t be absolutely certain. The mysterious Nexon prototype could also be employing a hybrid powertrain with a downsized motor.

The emergence of the electrified Nexon comes not long after the company’s managing director Guenter Butschek went on record to reveal that the engineers are working on a higher range electric powertrain with a range of 200 to 230 km. The Nexon would be an ideal test bed for the new technology considering that it plays in one of the most lucrative segments in the market.

We expect more details about the Tata Nexon EV to be revealed in the coming months. There is a decent chance for the electric crossover to make its debut at the 2020 Auto Expo. The upcoming Tata Altroz premium hatchback as well as the H2X concept based mini crossover SUV will also have EV variants. Interesting times are ahead!