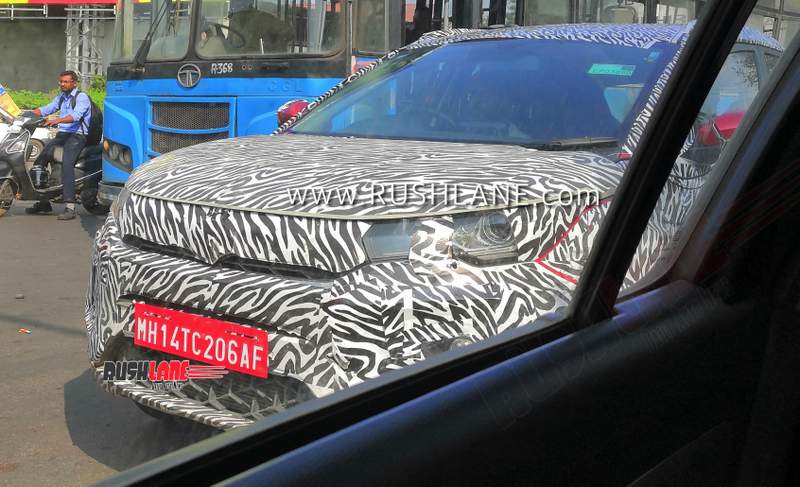 While the focus is currently on Nexon Electric, we are witnessing some movement on Nexon petrol and diesel variant as well. Expected to be launched in the coming months, 2020 Tata Nexon facelift will be getting a range of exterior and interior updates. Other key changes include BS-VI compliant engine and enhanced safety features.

Latest spy shots of the 2020 Tata Nexon were shared by automotive enthusiast Siddharth Patil and Ibad Rayman. One set of spy shots were clicked in the city of Pune, while the other was clicked in Ladakh region.

New spy shots reveal a redesigned front section that includes an updated bonnet, new bumper design, re-profiled fog lamp units and new headlights with DRLs. Front grille has also been updated, which is now sportier and looks similar to that of Harrier. Lower bumper features a design which was seen on the Tata H2X concept’s tail light LED DRL.

Nexon facelift is also likely to get new alloy wheels and updated rear section, even though it will continue to have the same basic silhouette as that of current model. These updates are also expected to be incorporated on Nexon EV when it reaches final production stage.

Interior updates haven’t been confirmed, but it is expected that Nexon facelift will offer a more premium experience with changes to upholstery and other components. Existing instrument cluster could be replaced with a sportier Bosch-sourced all-digital unit. Some new equipment could also be added to keep up with the competition that includes the likes of Hyundai Venue, Ford EcoSport and Mahindra XUV300.

In terms of safety, Nexon facelift will continue with all safety features like current variant. In addition to that, provisions could also have been made for pedestrian protection norms that will be implemented for all cars from October 2020. It is worth mentioning that Nexon has received 5-star safety rating in Global NCAP crash test. It is the first and only car in India to receive 5-star safety rating.

With the upgrades and new features, Nexon facelift could become pricier by around Rs 50,000. Launch is expected later this year or sometime in early 2020.