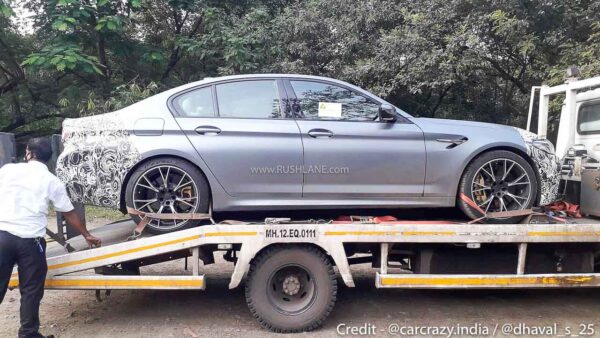 BMW 5 Series along with the top of the line M5, received a mid life update in international markets in July. It looks like this super-sedan is now bound for Indian markets with the M5 facelift being spied on test in Pune.

This is the first time that the M5 has been spotted in India. The spy shots are credit to @dhaval_s_25 and @carcrazy.india. It seems that the car has just arrived at the ARAI facility in Pune, and was getting off-loaded from trailer while the spy images were clicked. Despite heavy camouflage, several feature updates were noted. 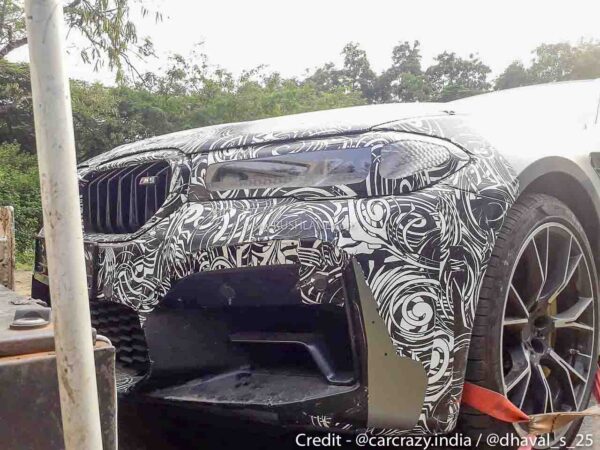 Tail lamps get a smoked out effect. It also receives a Dynamic Laser Matrix Beam for added lighting. The front apron and rear diffuser are finished in black along with a carbon fiber roof, black boot lid spoiler and while the test car was seen with silver alloy wheels. Wheel sizes vary with the BMW M5 receiving 19 inch wheels that increases to blackened 20 inch alloy wheels on the M5 Competition trim. 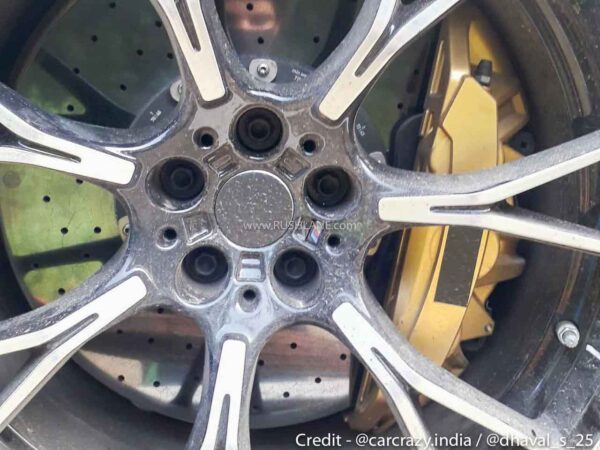 2021 BMW M5 gets multiple drive modes of Comfort, Sport, Sport+ and Track while there are new buttons seen on its central console for switching between Road and Track modes. Safety equipment includes a 360 degree camera and a total of 7 airbags. Safety is also enhanced with automatic emergency braking, lane departure warning, adaptive cruise control and high beam assist

BMW M5 is powered by a 4.4 liter, twin turbocharged V8 engine. This engine offers 600 hp power and 750 Nm torque on the BMW M5 Standard variant while on the Competition variant this goes up to 620 hp while torque figure remains the same at 750 Nm. Both variants receive an 8 speed M-Steptronic automatic transmission unit sending power to all wheels via an M XDrive system. 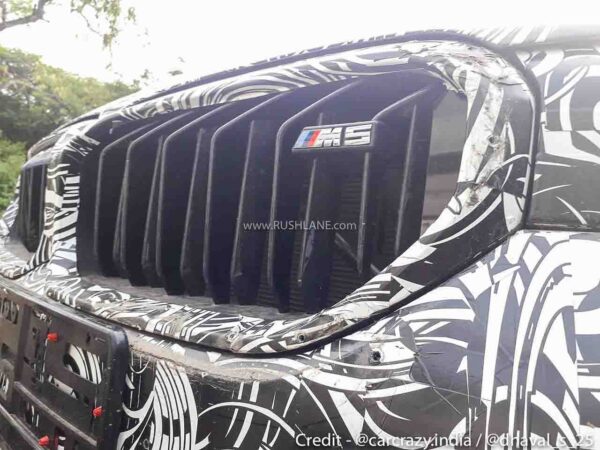 New BMW M5 also gets three modes of 4WD, 4WD Sport and Drift Mode – 2WD. BMW M5 commands acceleration from 0 to 100 km/h in 3.4 seconds while the Competition reaches this speed in 0.1 second less. Top speed is at 250 km/h which can be increased to 305 km/h with the optional M Driver Package.

BMW India has not yet revealed launch details of the new M5. However, it could arrive sometime in 2021 alongside the standard 5 Series. Where pricing is concerned, the pre facelift M5 Competition is currently available at Rs.1.55 crores. Once launched, it will take on the Mercedes-AMG E 63 and Audi RS7 in terms of competition.