A couple of weeks after Ducati revealed the 2021 version of Diavel 1260, the Italian superbike manufacturer has now unveiled a limited-run Lamborghini Edition of the same. This special edition of the muscle cruiser was unveiled at the fourth episode of Ducati World Premiere.

Ducati Diavel 1260 Lamborghini Edition has been inspired by the limited edition Lamborghini Siàn FKP 37 hybrid supercar. The power cruiser even sports the same colour scheme called Gea Green which has been used on the Siàn FKP 37 and looks exemplary on both vehicles. 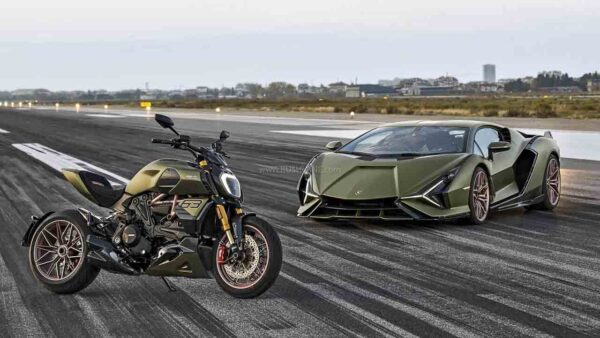 While Lamborghini has restricted this supercar to only 63 units of production model, Ducati has been more generous and will sell 630 units of the special edition Diavel 1260. Both Lamborghini and Ducati designers have worked hand in hand to deliver something worth being a Limited Edition. To add to the premiumness, the new Diavel gets golden USD forks.

However, the highlight in this design remains the golden forged rims used in the alloy wheels. The typical Ducati Red is used for colouring the Brembo brake calipers. Even the frame incorporated has shades of gold in it. Other design highlights which are inspired by Siàn FKP 37 are radiator covers, air intakes, fuel tank cover, mudguards, muffler and seat cover. 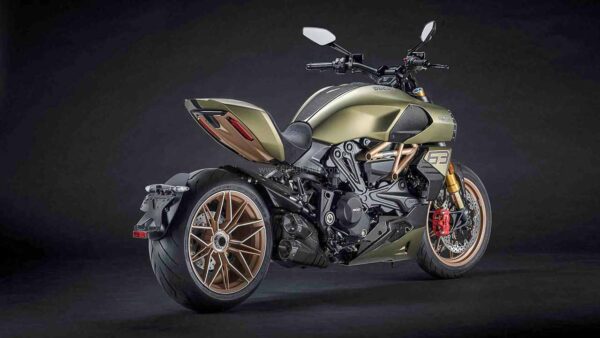 The dashboard cover and headlight frame like all the above mentioned components have been made of carbon fibre designed by superimposing floating elements on the main structure of the bike. The bike also pays homage to Automobili Lamborghini’s founding year by imprinting the number 63 on its semi-fairing. The Y-shaped details in FKP 37 have been carried over to the Ducati’s Y-shaped cutouts in the saddle and hexagonal muffler.

Diavel 1260 Lamborghini has been built on the same tubular steel trellis frame as the regular model and is assisted by fully adjustable Öhlins suspensions at the front and rear. Other components like the 17-inch wheels with 240mm profile tyres have been carried over from the standard model. It tips the weighing scales at 220 kg. 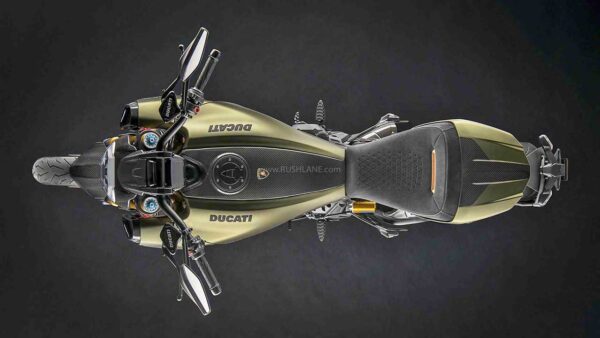 Coming to its performance, Diavel 1260 Lamborghini is powered by a 1262cc L-Twin Testastretta DVT engine. In its Euro 5 configuration, this unit pushes out a maximum of 162 hp at 9,500 rpm and a peak torque of 129 Nm at 7500 rpm. Being a Ducati it comes with a host of electronic aids such as Cornering ABS EVO, Bosch’s 6-axis Inertial Measurement Unit (6D IMU), Ducati Power Launch EVO (DPL), Cruise Control and Traction Control EVO (DTC).

At a price of USD 31,995 (Rs 23.63 lakhs), it is a healthy USD 11,700 (Rs 8.64 lakhs) costlier than its base model. Along with this special edition motorcycle, consumers can also opt for a special jet-style helmet with coordinated graphics, designed by Centro Stile Ducati with the number 63 badging.