Honda has launched the Honda City eHEV Sport hybrid variant in Thailand. The car is priced at 839,000 Bhat which roughly translates into INR 20.5 lakhs. The car was first unveiled for the Malaysian market however Honda has decided to launch it first in Thailand. It is also seen in an all new shade of Blue, which was not on offer earlier.

The hybrid sedan is later expected to be brought to multiple other countries, like Malaysia and later to India as well. In terms of pricing, Honda is charging a premium of around INR 2.5 lakhs for the Hybrid system as the standard fully loaded gasoline-driven City RS retails at 739,000 Bhat (in Thailand), which is approximately equal to INR 18 lakhs. 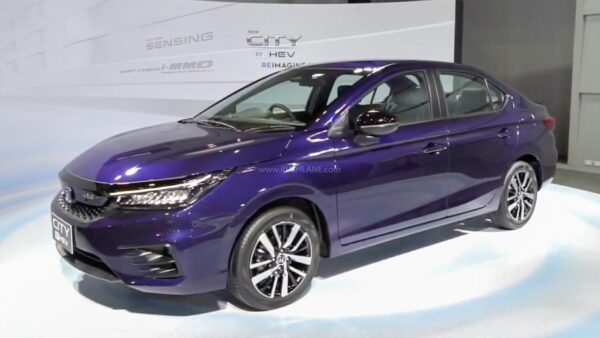 The City e:HEV Sport Hybrid gets the smallest version of Honda’s i-MMD (Intelligent Multi-Mode Drive) hybrid system. As expected, the system draws power from a combination of an electric motor and a petrol engine. The electric motor is capable enough to dish out 108 PS and 253 Nm of max torque while the 1.5L Atkinson-cycle DOHC i-VTEC engine can churn out 98 PS and 127 Nm of peak torque.

Honda has installed a direct drive setup for transmission of power to the wheels and has done away with the requirement of a traditional gearbox. Claimed fuel efficiency as per Honda is 27.8 kmpl as per the New European Driving Cycle.

As the e:HEV becomes the new range-topping model for Thailand, Honda has brought in some additional goodies to justify the price tag. The goodies include steering wheel paddles, a 7-inch instrument cluster display and an electronic parking brake.

As the e:HEV is based upon the RS (Road Sailing) model, it gets all the visual enhancements which a standard RS model gets. These include a honeycomb grille at the front, a black boot-lid spoiler, 16-inch dual tone alloys, updated front bumper, rear diffuser and much more.

There is also an e:HEV badge on the boot lid, which helps to identify the variant. On the inside, customers get faux leather and suede upholstery along with red stitching and alloy pedals.

In India, Honda has confirmed that it plans to bring in the Hybrid variant of the City. It is safe to presume that the City Hybrid will get launched in H1’21. Pricing is expected to be around the INR 18- 20 lakh mark, significantly higher than the standard City.

Post launch, it will become the only such model in its segment, i.e. a hybrid version of a compact sedan. It will be interesting to see how the Indian consumers will respond to the launch, especially considering the sticker price.