Fiat Chrysler Automobiles(FCA), the parent company of Jeep, has decided to revive the Wagoneer nameplate by revealing the Grand Wagoneer concept. The automaker is bringing back the Wagoneer moniker by introducing an upscale, more premium and luxurious three-row SUV in both- a standard and Grand avatars.

For reference, the Wagoneer was a boxy station wagon from the Italian-American carmaker which was discontinued in the 1990s. It has been revived as a full-size luxury SUV and is slated to take on the likes of Range Rover, Land Rover Discovery, Chevrolet Tahoe and BMW X7 to name a few. As of now only the Grand Wagoneer concept has been revealed.

Both the Wagoneer and Grand Wagoneer are expected to go into production in the first half of 2021 at FCA’s Warren manufacturing facility in Michigan. The final production-spec model is not expected to differ much from the concept shown. The Wagoneer is going to be the first full-size three-row SUV from the automaker since the Commander and will offer a wide range of powertrain options and premium configurations. 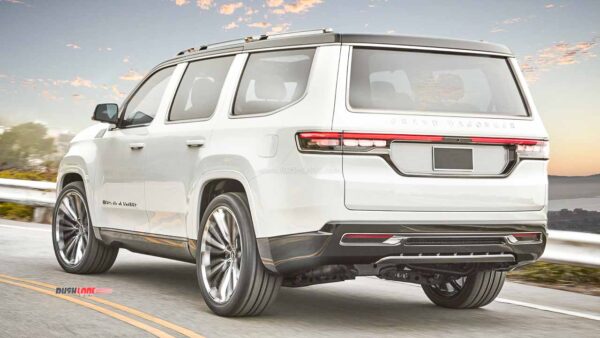 The Wagoneer will be developed on a new platform that will be designed for an IC (Internal Combustion) Engine, Hybrid and electrified powertrains. Essentially, the new Wagoneer is an SUV iteration of RAM 1500 pick-up truck. Like RAM 1500, the Wagoneer models too will feature a body-on-frame chassis, however, the latter will employ an independent rear suspension rather than the former’s solid rear axle.

There have been no official details about the range of powertrains, although one expects the RAM 1500 to share its power plants with Jeep. The Ram 1500 comes with three engine options and all are set to feature in the Wagoneer as well. 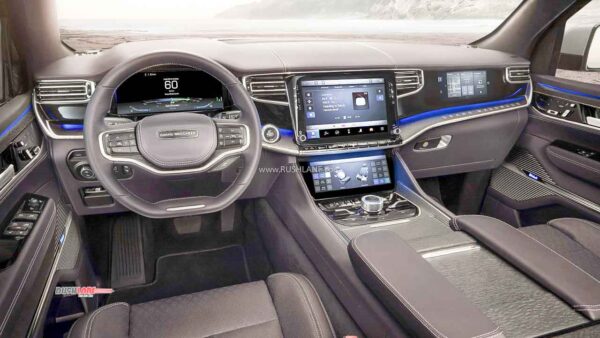 First up, is a 3.6-liter V-6 hybrid-assisted petrol engine, a 5.7-litre V8 petrol unit and a turbo-diesel V6 3.0-liter unit. A plug-in hybrid (PHEV) is also said to be offered. 4WD will be made standard. Transmission duties are said to be carried by FCA’s 9-speed automatic gearbox.

In terms of design, Jeep has let go most of the signature Wagoneer elements in the Grand Wagoneer concept. The design showcases it as a self-assertive vehicle filled with confidence. It has got loads of chrome all around and stands on huge 24-inch chunky tyres. It sports intricate detailing in its badging, grille and the headlamp cluster.The pillars stand absolutely vertically which feels a little awkward. 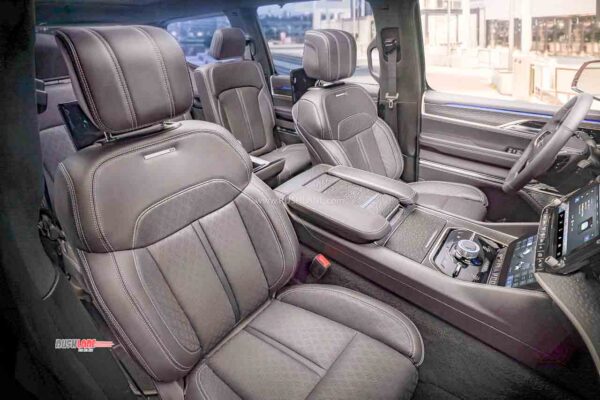 Since it is a luxury SUV, it is bound to offer tons of features inside the cabin Some of them are a 12.1-inch center touchscreen that sits above a 10.3-inch touchscreen with controls for the HVAC system, 12.1-inch fully digital instrument cluster, Uconnect5 connectivity features and a stereo system from McIntosh with 23 speakers among many more. It will feature a three-row layout with seating configurations of seven and eight people.

First introduced in 1962 as a 1963 model, the Wagoneer is a special vehicle as it was the first 4WD vehicle to feature an automatic transmission, thus laying the foundation of modern SUVs. The Wagoneer and Grand Wagoneer will be priced on the heavier side at $60,000 and $100,00 respectively. One can expect the production-spec model to be out in the market towards the end of next year.