2021 Kawasaki Z125 Pro Gets A Facelift With Added Colour Schemes

Japanese bike maker Kawasaki has introduced an updated version of Z125 Pro. The naked baby motorcycle gets a new set of colour schemes in its latest iteration. The updated paint schemes include options like Pearl Night Teal and Metallic Flat Spark Black.

The changes are, however, restricted to the colour palette as there are no aesthetic or mechanical updates. The design and feature list are identical to the pre-updated model. The naked mini roadster gets the usual bold front fascia with a sporty headlamp, underbelly exhaust pipe, fuel tanks extensions and engine cowl.

It employs a small 125cc twin-valve single-cylinder engine which produces a healthy 9.25 bhp at 7,500 rpm and 9.5 Nm of peak torque at 6,000 rpm. It is coupled with a 4-speed gearbox. Needless to say, the Japanese brand promises not only stunning looks but also an excellent performance on the naked roadster. 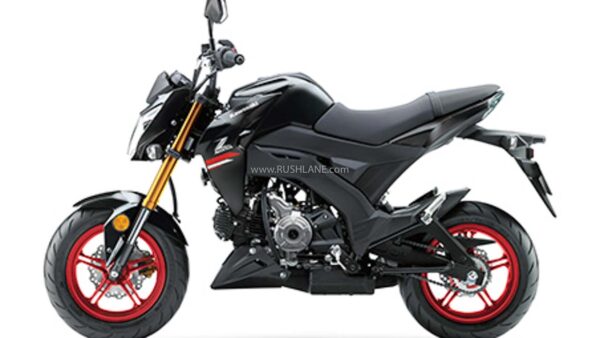 One of the highlighted features is the Smart Regulator which Kawasaki has developed for low-displacement motorcycles. This regulator is equipped with a built-in microprocessor which enables to control the charging function of the battery. The Smart Regulator enables charging even at idling speeds when the voltage generated is at its lowest. Price in Japan is 352,000 Yen or approx Rs 2.46 lakh.

Kawasaki recently made a string of new launches in India. This included the likes of Z900, the Vulcan S and Versys 650. All three belong to different categories of motorcycles. While the Z900 is a naked streetfighter, the Vulcan S is a proper cruiser motorcycle. On the other hand, Versys 650 is a hardcore adventure tourer bike.

The Vulcan S and Versys 650 are powered by the same BS6 compliant 649cc parallel-twin liquid-cooled DOHC engine. In the Versys 650, it generates 66 bhp of power whereas in the Vulcan S it produces 61 bhp. Torque figures, however, remain identical at 62 Nm. The Z900, on the other hand, draws its power from a 900cc BS6 updated engine which churns out 124 bhp and 99 Nm of peak torque. All three bikes are offered with a 6-speed transmission.