In global markets, the next-gen 2021 Kia Carnival minivan will launch in 7-,9- and 11-seat configurations

It was only recently that Kia Motors unveiled the exteriors of its upcoming fourth-gen Carnival minivan; also known as the Sedona or Grand Carnival in international markets. Now, the South Korean automaker has unveiled the 2021MY Kia Carnival’s interiors. The vehicle will come in 7- (2+2+3), 9- (2+2+2+3) and 11-seater (2+3+3+3) formats. ‘2’ denotes captain seats and ‘3’ implies a bench setup.

In comparison, the current third-gen Indian-spec Kia Carnival (read our detailed first-drive review) is offered in 7-, 8- (2+3+3) and 9-seater configurations. Even though Kia Motors India launched the minivan in early February at Auto Expo 2020, the pre-facelift ‘YP’ version made its global debut back in 2014. Though the vehicle comes with a lot (especially in the range-topping Limousine trim), its age is observable from the rather generic interior layout.

Like its exterior styling, the all-new Kia Carnival features a massive revamp inside, complete with a pair of 12.3-inch touchscreen and digital instrument console, grey/beige theme, new three-spoke steering wheel and a neat integration of AC vents. Subtle chrome accents against gloss black aid in the overall elegance. According to Kia Motors, the 2021MY Carnival employs ‘Spatial Talents’ cabin design concept.

Kia Motors shares that more details (including powertrain options) would be revealed in the coming weeks. Over the past couple of months, the vehicle was spotted in its home market in both test mule and undisguised avatars. It would take at least a year and a half for the fourth-gen Kia Carnival to hit Indian roads. 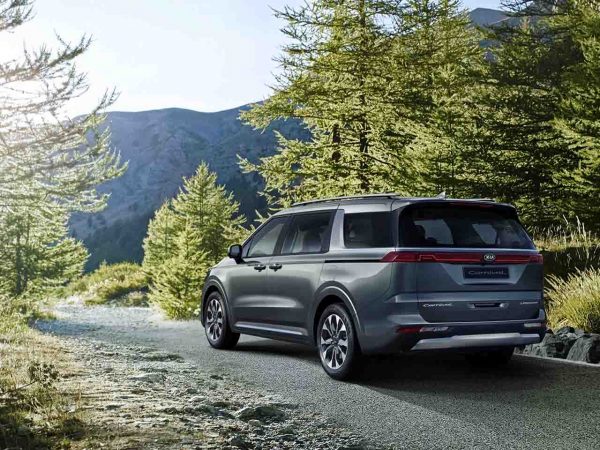 The third-gen Kia Carnival (2020MY in India) is sold in our market with a single powertrain option — 2.2-litre four-cylinder diesel engine good for 197bhp and 440Nm of torque. This is mated to an 8-speed torque-converter automatic transmission. Prices start at Rs 24.95 lakh ex-showroom. Kia Motors India has only two products in its portfolio: Seltos and Carnival.