Mahindra Thar based Roxor gets a New Face – Minus Jeep Elements

Earlier this year Mahindra’s US subsidiary, Mahindra Automotive North America (MANA), ran into hot waters when a local Michigan court ruling barred it from selling the Roxor on American shores. Last year a lawsuit was filed by Fiat Chrysler Automobiles (FCA) against MANA for infringement of design.

FCA’s contention was that Mahindra had infringed the Wrangler’s front grille design on Roxor. As a result, it was barred from selling the off-roader in the US. This meant that the designing team of Mahindra had to get back to their drawing board and redesign the entire front. A couple of months earlier the Indian manufacturer released a sneak peek of the updated 2021 Roxor which was partially covered.

Now, the reworked 2021 Mahindra Roxor front has been fully revealed, and the front fascia looks nothing like before. To avoid any discrepancies, Mahindra has removed all Jeep resembling parts from the updated Roxor. The reconfigured front end now gets a broader nose which creates a lot more room between the headlights. It now gets a completely new horizontal two slat grille with honeycomb mesh-like black inserts on it. 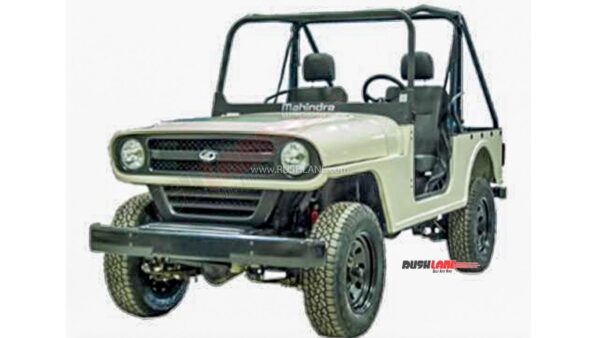 The front grille is seen tapering down to the bumper which is a separate unit thus exposing the suspension setup and tyres. This lends a barebones feel to the Roxor. The overall retro-style theme has been retained by Mahindra. The round headlight units are the same as before with LED detailing expected inside.

For the uninitiated, Roxor is based on the now-discontinued first generation Mahindra Thar. 2021 Roxor shares most of its components including the running gear and its underpinnings. It is powered by the same 2.5-litre diesel engine which also powered the outgoing Thar. The 64 bhp unit is mated to either a 5-speed manual or a 6-speed automatic transmission. The same powertrain and transmission combination is likely to be offered in the updated Roxor. It also gets a 2-speed transfer case, leaf springs and full-floating axles.

On the other hand, Thar is born out of the same DNA as the Jeep Wrangler and that is why there is so much similarity between the two models. The new-gen Thar’s silhouette resembles the current Wrangler model but Mahindra has avoided any further controversy by opting for a fresh grille design on the new generation model. This is the same reason why Roxor looked so similar to the Wrangler, as both comply with the design of the old Jeep Willys.

Back in India, the new-gen Thar has already been revealed and it has been receiving applause from all quarters. The prices will be revealed at the time of launch on October 2.