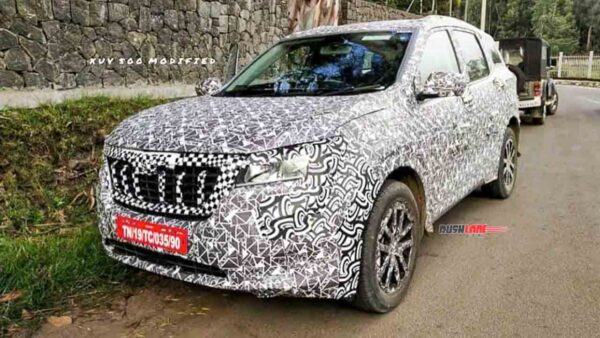 The next generation Mahindra XUV500 has been one of the keenly awaited SUVs in the country. It has been in development for almost two years now and has been spied testing on roads for almost a year now. We hoped to see the new model by the end of this year, however, the Covid-19 pandemic has adversely affected the manufacturer’s launch plans.

Over a period of time, several spied images of the new XUV500 have gone around the internet. From each set of images, we got to see something new about the upcoming model. The latest set of spy images, credit to Team-BHP member Vinod Moorthy, Instagram user KodaiVik and XUV500 Modified; reveal the XUV500 in production ready guise for the first time.

Still being tested under heavy camouflage, this is the first time we are seeing the actual, production spec LED headlight in the front and LED tail light at the rear. All earlier spy shots of 2021 XUV500 were seen with decoy headlights and taillamps. These new images also reveal the grille design of new gen XUV500.

The interiors of the upcoming XUV500, as seen from earlier spied images, have been completely overhauled and looks nothing like the new model. The new design takes a simplistic approach that looks cleaner. It also gets a flat-bottom steering wheel which looks sporty. Instead of the dual-tone colour scheme, it is expected to get an all-black treatment inside the cabin.

As far as powertrain is concerned, it is likely to be powered by a reconfigured 2.2-litre mHawk diesel engine which currently powers the upcoming new Thar. However, power output is expected to be higher in the range of 180-190 bhp. Transmission duties are likely to be carried out either by a 6-speed manual or a 6-speed automatic. We also expect the 2.0-litre mStallion turbo petrol unit to be offered in the new XUV500. An all-wheel drive (AWD) should also be offered as optional.

Upon its launch, the new XUV500 will lock its horn with other mid-size SUVs such as MG Hector, Tata Harrier and seven-seater Hyundai Creta. It could also be a rival to Hector Plus and upcoming Tata Gravitas. The new-gen XUV500 is expected to be launched sometime early next year.