A popular entry-level hatchback, Maruti Suzuki Celerio will soon be launched in its next-gen avatar. An update is long overdue, as the first-gen variant has been soldering on since 2014. At the time of its launch, Celerio had emerged as a game changer by offering automatic-like option at affordable rates. Yes, Celerio is India’s first car with AMT. Another plus for users was that Celerio manual and automatic variants offered the same mileage.

Celerio has registered consistent sales over the years. In recent times, monthly sales hover in the range of around 4k to 6k. In the small hatch segment, BS6 Celerio has consistently ranked in the top five. A bump in sales can be expected when the next-gen Celerio is launched in the coming weeks.

New gen 2021 Maruti Celerio was first spied a few weeks ago. But that time, only the rear was revealed. In the latest spy shots, the front too has been revealed. As revealed in new spy shots, next-gen Celerio appears to be bigger and has higher ground clearance in comparison to the current model. The overall styling is more in line with a SUV crossover rather than a standard hatch. 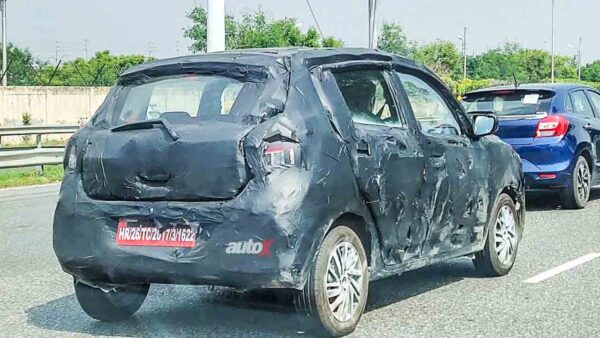 2021 Celerio will be utilizing the Heartect platform that is already in use in cars such as S-Presso, Ignis, Wagon R, Dzire, Swift, Baleno, S-Cross, Ertiga and XL6. The Heartect platform offers multiple benefits including improved safety, higher fuel efficiency, and enhanced driving performance.

Second generation Celerio is expected to have a longer wheelbase, which will ensure more cabin space for users. Rides are expected to be more comfortable, as the car will have improved ergonomics and better set of seats.

Both manual and automatic variants of current Celerio can deliver 21.63 km/l, which is quite good. These numbers could change if next-gen Celerio is lighter or heavier than the current model. Celerio also comes with factory-fitted CNG option, which delivers 30.47 km/kg.

Next-gen Celerio will continue to rival the likes of Tata Tiago, Hyundai Santro, and Renault Kwid. It will be competitively priced; close to the current model that retails in the range of Rs 4.46 lakh to Rs 5.73 lakh, ex-sh.